Religious Literacy 101, Quiz about the arrest, trial, and execution of Jesus.

Lenten Reflections, Topic 18, has just been posted on Flipgrid. You can access it by clicking here.
Posted by David G. Markham at 12:10 PM 0 comments Links to this post 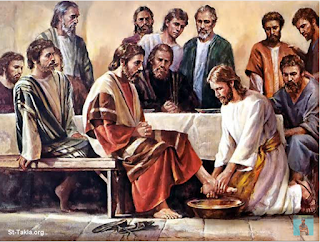 Now before the festival of the Passover, Jesus knew that his hour had come to depart from this world and go to the Father. Having loved his own who were in the world, he loved them to the end. The devil had already put it into the heart of Judas son of Simon Iscariot to betray him. And during supper Jesus, knowing that the Father had given all things into his hands, and that he had come from God and was going to God, got up from the table, took off his outer robe, and tied a towel around himself. Then he poured water into a basin and began to wash the disciples’ feet and to wipe them with the towel that was tied around him. He came to Simon Peter, who said to him, “Lord, are you going to wash my feet?”

Jesus answered, “You do not know now what I am doing, but later you will understand.”

Peter said to him, “You will never wash my feet.”

Jesus answered, “Unless I wash you, you have no share with me.”

Simon Peter said to him, “Lord, not my feet only but also my hands and my head!”

Jesus said to him, “One who has bathed does not need to wash, except for the feet, but is entirely clean. And you are clean, though not all of you.” For he knew who was to betray him; for this reason he said, “Not all of you are clean.”

After he had washed their feet, had put on his robe, and had returned to the table, he said to them, “Do you know what I have done to you? You call me Teacher and Lord— and you are right, for that is what I am. So if I, your Lord and Teacher, have washed your feet, you also ought to wash one another's feet. For I have set you an example, that you also should do as I have done to you.”

If you are to actually follow the teachings of Jesus, you are to wash the feet of others. Jesus is very clear in His teaching. He even acts it out. The teaching put simply is “Love as I have loved” which means to love one another.

But the ego doesn’t like unity. The ego likes to separate and divide and make special so that there is a pecking order where one’s ego can be bolstered by diminishing another. We do this many times a day, every day, every time we make a judgment and determine that another is “less than” they should be and in calling this a “fact” we make ourselves feel better because we think we are better than them.

What Jesus does on what we now call Maundy Thursday is counterintuitive. Peter highlights this by saying we would never allow Jesus to wash his feet, but Jesus tells him unless he allows this they cannot be one. Peter then says, “Well in that case, wash me all over from head to toe.”

What Jesus is demonstrating is the renunciation of the ego and the embracing of the Spirit. This is the main message of Lent. This is what Lent is all about. You will know that you have had a good Lent if your ego is a little weaker and your Spirit has been invigorated. During this Lenten Season have you become more loving, more generous, more empathic, more peaceful, happier? If so, you have had a good Lent. If not, maybe you would like to try again.

Renouncing the path of the ego and embracing the path of the Spirit does not end when Lent is over, it is the work of a lifetime. You can continue by washing a few people’s feet. And whose feet should you wash? Anyone that life puts in your path. Start today. Start right now.

Posted by David G. Markham at 11:41 AM 0 comments Links to this post

Lenten Reflections, Topic 17, Awakening to Peace and Bliss, has just been added to Flipgrid which you can access by clicking here.

Then one of the twelve, who was called Judas Iscariot, went to the chief priests and said, “What will you give me if I betray him to you?”

They paid him thirty pieces of silver. And from that moment he began to look for an opportunity to betray him. On the first day of Unleavened Bread the disciples came to Jesus, saying, “Where do you want us to make the preparations for you to eat the Passover?”

He said, “Go into the city to a certain man, and say to him, ‘The Teacher says, My time is near; I will keep the Passover at your house with my disciples.’”

So the disciples did as Jesus had directed them, and they prepared the Passover meal. When it was evening, he took his place with the twelve; and while they were eating, he said, “Truly I tell you, one of you will betray me.”

And they became greatly distressed and began to say to him one after another, “Surely not I, Lord?”

He answered, “The one who has dipped his hand into the bowl with me will betray me. The Son of Man goes as it is written of him, but woe to that one by whom the Son of Man is betrayed! It would have been better for that one not to have been born.”

Judas, who betrayed him, said, “Surely not I, Rabbi?”

He replied, “You have said so.”

The way John tells the story he is blunt and to the point. Jesus was a wanted man by the Chief Priests and Judas became the bounty hunter. For Judas it was all about the money so the story goes and whether there was more to his disloyalty and betrayal we can only speculate. Judas obviously loved money more than Jesus and for most cultural Christians the same is true today. Some popular Christian celebrity preachers even capitalize on this desire of the ego by preaching what is called the “prosperity gospel,” meaning that God’s favor is manifested by enabling people to obtain lots of money.

Jesus knew that His teaching of God’s unconditional love and the innate holiness of every human being was falling on deaf ears. The situation, though, was not only the ignoring with deaf ears by those in power, but the vengeance to attack, and silence by killing. Jesus, apparently, could feel it in the air and knew that His days were numbered.

Did Jesus silence Himself and drop His teaching? No. He was true to Himself and to the God He believed He was working for and moved ahead anyway. This takes tremendous integrity, courage, fortitude, and mindfulness. Jesus manifested clearly His choice and power to walk the path of the Spirit instead of the path of the ego.

It is Jesus' example which motivates and vivifies the purpose of Lent which is to remind us that the path of the ego will not make us happy but only lead to betrayal, disillusionment, suffering, and death while the path of the Spirit leads to an awakening to peace and bliss.

Posted by David G. Markham at 9:00 AM 0 comments Links to this post

Day Forty two, Tuesday of Holy Week
Unconditional love is to be found on the right frequency.

After saying this Jesus was troubled in spirit, and declared, “Very truly, I tell you, one of you will betray me.”

Jesus answered, “It is the one to whom I give this piece of bread when I have dipped it in the dish.”

Now no one at the table knew why he said this to him. Some thought that, because Judas had the common purse, Jesus was telling him, “Buy what we need for the festival”; or, that he should give something to the poor.

So, after receiving the piece of bread, he immediately went out. And it was night. When he had gone out, Jesus said, “Now the Son of Man has been glorified, and God has been glorified in him. If God has been glorified in him, God will also glorify him in himself and will glorify him at once. Little children, I am with you only a little longer. You will look for me; and as I said to the Jews so now I say to you, ‘Where I am going, you cannot come.’ I give you a new commandment, that you love one another. Just as I have loved you, you also should love one another. By this everyone will know that you are my disciples, if you have love for one another.”

Simon Peter said to him, “Lord, where are you going?”

Peter said to him, “Lord, why can I not follow you now? I will lay down my life for you.”

Jesus answered, “Will you lay down your life for me? Very truly, I tell you, before the cock crows, you will have denied me three times.”

This is the saddest part of the gospel story as it depicts the betrayal by Jesus’ closest friends. Everyone has been betrayed by a friend, a lover, a spouse, a boss, a teacher, a pastor. The expression that gets used is to have your heart broken. The body is nothing, but the heart is something far more important.

We all have been betrayed many times, and we have betrayed others. The breach in trust is the biggest sin in the world. It is the separation and divisiveness of rapport and unity. It cuts us to the quick. Conditional love usually ends badly.

Juxtapose betrayal and breach of trust with Jesus’ injunction to love one another. Jesus says it is this unity, this trust, this rapport with one another which will be the sign by which other people will know that they are His disciples. Jesus is talking about unconditional love which is very rare in human experience.

We are moved by compassion, generosity, cooperation, support, helpfulness, understanding. We are distressed by judgment, stinginess, stubbornness, sabotage, attack, and calumny.

As we come to the end of this Lenten Season, we once again are reminded of the dissatisfaction, pain, suffering, and agony of the world of the ego. Special relationships where we burden another with the responsibility for our happiness always fail in the end because we are looking for love in all the wrong places. Holy relationships are based on unconditional love, a love which is our natural inheritance. It is a love we have forgotten as we have become socialized and conditioned into believing that happiness is to be found by putting our faith in the world of the ego. Unconditional love is emanating throughout creation and we can experience it if we tune in on the right frequency.

Posted by David G. Markham at 2:38 PM 0 comments Links to this post