Racism and its effects on children's health. 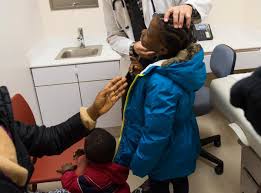 William Wan wrote an article in the Washington Post published on 08/02/19 entitled "Racism has devastating effects on children's health, pediatricians warn":
The nation’s largest group of pediatricians warned this week that racism can have devastating long-term effects on children’s health.
A policy statement from the American Academy of Pediatrics is the first it has issued to its members on the dangers of racism. Doctors involved in the report said the current political and cultural atmosphere makes the work more urgent.
“If you look at what’s in the news today, in social media, on Twitter, there’s so much kids are exposed to,” said Jackie Douge, a pediatrician with the Howard County Health Department who co-wrote the statement. “As much as you want to keep it in the background, it’s not in the background. It’s having direct health effects on kids.”
Their report comes at a time when racism is dominating headlines, driven by racist tweets from President Trump, which have inspired chants at his rallies, and also by the rise of white nationalism.
Other pediatricians welcomed the report, which drew on 180 key studies and includes specific recommendations, and said the danger to their patients has become acute.
Editor's note: The social justice issue chosen for this year at my church, First Universalist of Rochester, NY is racism. I will be posting articles dealing with the topic of systemic racism on this blog throughout the year.
The first step in working on social justice issues is to have a good working definition of the problem. We encounter systemic racism in every major sector of our society from education, to health care, to criminal justice, to housing, to social welfare, to sports, to the economy, to participation in religious organizations, etc. Articles posted here will be tagged "racism - ..." with whatever sector is being reported on. In this story quotes above the tag is "racism-health care."
Posted by David G. Markham at 8:12 PM 0 comments