Cheney: "Do you believe in the peaceful transfer of power in the United States of America?" 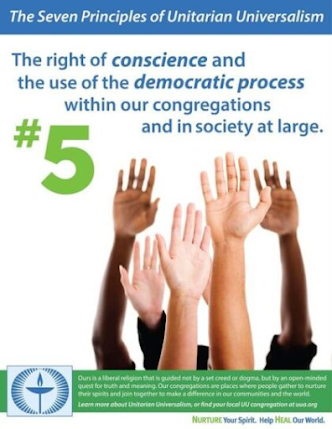 The fifth of the seven principles of Unitarian Universalism is to covenant together to affirm and promote the right of conscience and the use of the democratic process within our congregations and in society at large.

January 6th will be henceforth known as Fifth Principle Day. 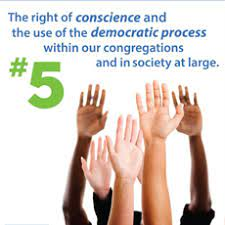 UU A Way Of Life has passed a resolution that today, January 6th, will be hence forth known as fifth principle day.

January 6th has now become known in the United States as Treason Day.

Treason Day is the day that the President of the United States, Donald R. Trump, led a group of insurrectionists to our nations capitol building to forcibly overturn the results of a free and fair democratic election.

Property in the capitol building was destroyed. People were physically assaulted and people died.

This activity is in direct violation of Unitarian Universalism's fifth principle which is to affirm and promote the right of conscience and the use of the democratic process within our congregations and in society at large.

Thus UU A Way of Life has made a resolution that UUs will acknowledge, celebrate, affirm and promote in intentional, deliberate, and purposeful ways the fifth principle of its living tradition on January sixth. There are many ways to do this and each congregation should actively engage in education, celebration, and advocacy on this day.

Let us uplift and uphold our democratic values so that treasonous values and activities are diminished and eliminated from our civic life.

Voter suppression and how it works in the United States


Unitarian Universalists covenant together to affirm and promote the right of conscience and the use of democratic processes within our congregations and in society at large.

Are the current "debates" really democratic? 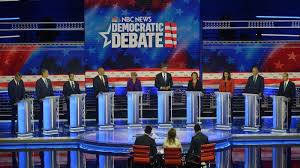 I tried to watch the "debate" among the Democrat candidates for the U.S. President last night and just couldn't. After 10 minutes I turned the TV off and went to bed to read "Regarding the Pain Of Others" by Susan Sontag.

We have become, in this age of electronic media a nation of voyeurs who are desiring to be entertained rather than informed. Plato must be rolling over in his grave. There is no effort to find the truth or beauty or goodness but rather to be persuasive and convince the viewers of their extraordinarianess.

The set up by the DNC and the news networks to engender the emotional arousal of the audience rather than serious reflection on the issues is an example of democracy in one of its worst aspects. The job of chosing representatives have become a popularity contest based on "crowd sourcing" strategies rather than vetting the most qualified person for the job.

If we are seeking a philosopher king or queen to lead our country, the format that has been chosen to help us identify the best person for the job is seriously flawed.

Unitarian Universalists covenant together to affirm and promote the right of conscience and the use of the democratic process within our congregations and in society at large. This reads like a noble principle and yet it doesn't specify what the "democratic process" or processes are. The term "demcratic" can be different things to different people and what is democratic about 12 candidates on a stage being triggered by provocative questions so they can attack each other and struggle to one up each other seems like entertainment like World Federation Wrestling rather than a helpful, substantive, exercise in discussing the issues that face us all not only in the United States but in the world.
Posted by David G. Markham at 8:57 AM 0 comments

When the question arose about who would be willing to help with the October, 2016 service in our small UU congregation about "politics", the story in Matthew 15 - 22 immediately came to mind:

15 Then the Pharisees went and plotted to entrap him in what he said.16 So they sent their disciples to him, along with the Herodians, saying, “Teacher, we know that you are sincere, and teach the way of God in accordance with truth, and show deference to no one; for you do not regard people with partiality. 17 Tell us, then, what you think. Is it lawful to pay taxes to the emperor, or not?” 18 But Jesus, aware of their malice, said, “Why are you putting me to the test, you hypocrites? 19 Show me the coin used for the tax.” And they brought him a denarius. 20 Then he said to them, “Whose head is this, and whose title?” 21 They answered, “The emperor’s.” Then he said to them, “Give therefore to the emperor the things that are the emperor’s, and to God the things that are God’s.”22 When they heard this, they were amazed; and they left him and went away.

It seemed that in this year, 2016, with an increasingly polarized and ugly presidential campaign season, the idea to address "politics" was like walking into a mine field. UUs covenant together to affirm and promote a principle, the fifth of seven, "the right of conscience and the use of the democratic process within our congregations and in society at large." Having been raised a Roman Catholic and as a practitioner of that religion before  moving to Unitarian Universalism, the teachings of Jesus still ring true and resonate strongly in the head and heart to the extent that there is a realization that the kingdom of which Jesus taught is not of this world. The story is told in John 18:


Pilate then went back inside the palace, summoned Jesus and asked him, “Are you the king of the Jews?”
34 “Is that your own idea,” Jesus asked, “or did others talk to you about me?”
35 “Am I a Jew?” Pilate replied. “Your own people and chief priests handed you over to me. What is it you have done?”
36 Jesus said, “My kingdom is not of this world. If it were, my servants would fight to prevent my arrest by the Jewish leaders. But now my kingdom is from another place.”
37 “You are a king, then!” said Pilate.
Jesus answered, “You say that I am a king. In fact, the reason I was born and came into the world is to testify to the truth. Everyone on the side of truth listens to me.”


38 “What is truth?” retorted Pilate.
And Jesus puts His finger right on the issue when it comes to the "right of conscience" and that is "what is the truth?"
It does not appear that the truth is important in the 2016 Presidential campaign and yet it is something that we Unitarian Universalists profess to care about. Our caring can be very stressful until we realize that the truth which we seek in faith is not likely to be found easily in this world of ego drama, but rather in the transcendent understanding of the interdependent web of all existence of which we are just a tiny part. If we are to take Jesus' advice, we simply give to the Emperor that things that are the Emperor's, and to God the things that are God's. The things that are of God is love for Jesus told us that the way to His Kingdom is "to love as I have loved." Unitarian Universalists strive to Stand On The Side Of Love which is the best politics of all.
Posted by David G. Markham at 7:00 AM 0 comments

How does the "right of conscience" and "use of democratic process" get applied in this election year of 2016 for a UU?

It was mentioned at church yesterday that the topic for reflection in October in our congregation might be "politics."

In thinking about this topic, the fifth principle stands out, "The right of conscience and the use of the democratic process within our congregations and in society at large" as being the basis for reflection at this service. A particular focus on this topic might be how we manage our emotions and interactions as individuals, as congregations, and as a denomination of religious people with people who have different opinions and values than our own? Can we be kind and compassionate to those who have different political preferences? Should we be?

Our fifth principle beginning with "the right of conscience" seems to imply a respect for other people's beliefs, opinions, and preferences even if they are different from our own. How does one apply this principle in election season? Please leave your thoughts and comments.
Posted by David G. Markham at 11:42 AM 1 comments