Consequences of collective karma are not good 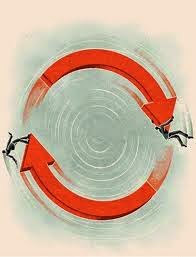 A Buddhist Response To The Climate Emergency edited by John Stanley, David R. Loy, and Gyurme Dorje is an eye opener, a mind opener, and cracks you soul wide open if you take its articles seriously, sensitively, and humbly.

It starts off with a bang as they say:

"Today we live in a time of great crisis, confronted by the gravest challenge that humanity has ever faced: the ecological consequences of our own collective karma." p.4

Meanwhile down at the Java Junction on the sidewalk cafe in Brockport, NY we discussed the migrant immigrant kids the HHS wants to put in the old vacated Walmart store just outside of town. Our congressional representative Chris Collins, Republican, says that he doesn't want the kids put there because the tax payers of New York State don't want to pay for their care. Of course there won't be any state of local taxpayer money going into this, because it will all be paid for by the Feds. It might even bring money into the community with jobs, buying food and other services. Talk about collective Karma. According to Collins we, Brockporters, and New York Staters don't want to spend money in immigrant kids.

What kind of a people have we become? The collective karma is not good in so many ways.