Good news for 10/11/20 - In disasters people do much more good than bad studies show. 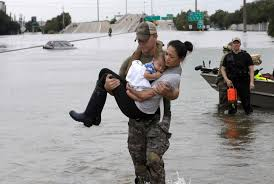 From the American Journal Of Public Health, October, 2020, pp.1448 - 1449
Another side of the coin operative during Hurricane Katrina is that, contrary to what was often reported by the media and went viral, there was the demonstration of human kindness: “That whole week newspapers were filled with accounts of rapes and shootings across New Orleans” and “There were terrifying reports of roving gangs, lootings and of a sniper taking aim at rescue helicopters. . . . The chief of police said the city was slipping into anarchy, and the governor of Louisiana feared the same. ‘What angers me the most,’ she said, ‘is that disasters like this often bring out the worst in people.’”4(p18) This narrative playing out in the media was reinforcing the myth of the veneer theory coined by Frans de Waal, which posits:
Civilization is nothing more than a thin veneer that will crack at the merest provocation. In actuality, the opposite is true. It’s when crisis hits—when the bombs fall or the floodwaters rise—that we humans become our best selves.4(p17)
It wasn’t until months later, and reported out of the media spotlight of the immediate disaster, that:
Researchers from the Disaster Research Center (DRC) at the University of Delaware concluded that “the overwhelming majority of the emergent activity was prosocial in nature.” A veritable armada of boats from as far away as Texas came to save people from the rising waters. Hundreds of civilians formed rescue squads, like the self-styled Robin Hood Looters—a group of eleven friends who went around looking for food, clothing and medicine and then handing it out to those in need. Katrina, in short, didn’t see New Orleans overrun with self-interest and anarchy. Rather, the city was inundated with courage and charity.4(p18)
This sowing of a spontaneous response and support for others can result in a bountiful harvest that we also reap in strengthening community resilience and saving lives. Katrina essentially reconfirmed the scientific evidence on how communities react to public health emergencies. The Disaster Research Center has established that, in nearly seven hundred field studies since 1963, there’s never total mayhem. It’s never every man for himself. Crime—murder, burglary, rape—usually drops. People don’t go into shock, they stay calm and spring into action. “Whatever the extent of the looting,” a disaster researcher points out, “it always pales in significance to the widespread altruism that leads to free and massive giving and sharing of goods and services.”4(p18–19)
Posted by David G. Markham at 1:29 PM 0 comments