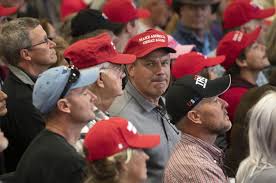 In the book The Social Psychology of Morality: Exploring The Causes of Good and Evil" there is a chapter written by Jesse Graham and Jonathan Haidt entitled, "Sacred Values and Evil Adversaries: A Moral Foundations Approach" in which they describe the social -functiontionalist approach to describing moral systems and how they function in societies. As part ot this approach, they make a distinction, as much of sociology does, on the distinction between the sacred and the profane.

In describing this distinction between the sacried and the profane they write, "Shared emotions and practices related to sacred things bind people together in cults, churches, and communities. Sacredness does not require a God. Flags, national holidays, and other markers of collective solidarity are sacred in the same way - and serve the same group-binding function- as crosses and holy days." p.13

The MAGA people. the so called Trump base, have been called by media pundits a cult. In talking with people, and observing the jokes about family holiday get togethers being ruined by political discussions,  I get the idea that partisan party affiliation seems to be the same type of group identification as religious affilitation. Challenging a person's partisan political party affiliation seems the same as challenging their beliefs in their religion. The same can be said about die hard fans of a sports team or membership in fraternies, sororities, or civic groups like Rotary, Kiwanis, LIons, Elks, the Masons. I have seen the same identification to volunteer fire departments in rural communities.

At any rate this binding together with group values, beliefs, practices, traditions, rituals, symbols, is the foundational genesis for a moral orientation where the group insiders are good and the outsides are bad or at least suspect as not being "one of us."

Curious about what thoughts people might have about poltical party affiliation functioning for individuals and groups like religion. To what extent are these separation practices of "us and them" the basis of immorality?
Posted by David G. Markham at 9:26 AM 0 comments