Letters - Who is my brother? 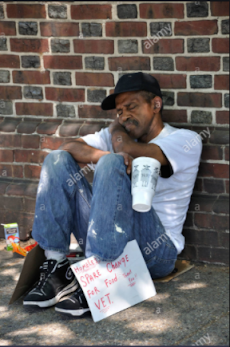 Dear Dave:
There are five guys leaving a professional workshop to go to lunch. Four are white and one is black. On the way to the restaurant they pass a homeless, intoxicated black man begging. They all pass him but then the black man stops and says to the others, "I'm want to check on him," which he does and then returns to the group. One of the white guys asks why he checked and the black man said, "Because he's a brother" The white guy asks, "Would you have done the same if he was white?" The black man said, "No."
What do you make of this story?
Larry
Dear Larry:
There is the Good Samaritan story in the New Testament of the Christian bible which kind of goes against the idea of only caring for one's kind.
What if the homeless wino had been white. Would any of the white guys have stopped or the black man for that matter?
Taking care of a brother is one thing. Taking care of someone not one's brother is a whole other thing.
I hypothesize that caring for one's brother is Darwinian in the sense that it enhances the survival of one's own gene pool, while taking care of the other does not serve necessarily the same biological purpose unless one enlarges the circle of concern from those who more closely resemble me.
The circle of one's identification seems to be correlated with one's level of spiritual consciousness. Identification with one's immediate affinity group such as members of one's  own race is a lower level of consciousness while identifying with homo sapiens is higher and with all living things is even higher yet.
This topic is concerned with this month's interview (December 2020) in The Sun Magazine with Eileen Crist on the in which she names the problem confronting us as a species in the sixth extinction as "human supremacy."
Going back to your example, I wonder if any of them would have stopped for a wounded animal?
And, of course, the most basic question of all is "Who would have stopped for me?"
David Markham
Posted by David G. Markham at 10:01 AM 0 comments