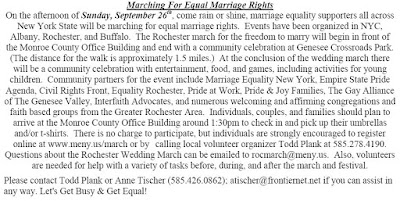 The New York Court of Appeals on Thursday affirmed the recognition of same-sex marriages by a county executive and a state agency, but by a bare 4-3 margin declined to extend full New York recognition to such marriages contracted in other states and countries where they are legal.

Rather, the four-judge majority importuned the Legislature to decide the question, as it did in 2006 when the court decided that same-sex couples have no constitutional right to wed within the state but left open the status of same-sex marriages contracted outside the state.

"We end, by repeating what we said in Hernandez v. Robles (7 NY3d 338 (2006)), expressing our hope that the Legislature will address this controversy; that it 'will listen and decide as wisely as it can; and that those unhappy with the result -- as many undoubtedly will be -- will respect it as people in a democratic state should respect choices democratically made,'" Judge Eugene F. Pigott Jr. wrote.

UUs believe in the inherent worth and dignity of every person, and justice, equity, and compassion in human relations. Have you let others know what you believe?
Posted by David G. Markham at 7:00 AM 0 comments