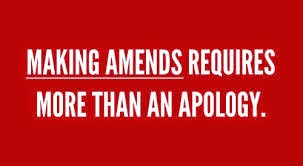 
“Forgiveness is the central theme that runs throughout salvation, holding all its parts in meaningful relationships, the course it runs directed and its outcome sure.” ACIM, Lesson 169.12.1

As we consider the second principle of "justice, equity, and compassion in human relations" we cannot understand these concepts without considering their opposites: injustice, inequity, and disrespect, and when we do consider the opposites it leads to ideas of rectification of these mistakes or evil as it is often called in theological discussions.

Rectification can occur without an acknowledgment of the harm done requiring the repair, but as human beings, we want to make sense out of our experience and so the recognition and the acknowledgment of injustice, inequity, and disrespect is needed so that the same mistakes and evil is not repeated, unknowingly, again.

Should there be reparations in the United States to African Americans for slavery? Has affirmative action policies been enough to repair the harm of ongoing racial discrimination and financial inequities of wealth distribution in our society? If a spouse "cheats" on his or her partner has there been an exploration and explanation of the factors that contributed to this infidelity occurring, along with a genuine apology, and how could the harm done by the betrayal be repaired?

The path to rectifying injustice, inequity, and disrespect is forgiveness made up of four steps: a discussion of and taking of responsibility for the harm that was done, a explanation of the factors which contributed to the mistake having been made, a genuine, not a band-aid, apology based on the first two steps, and the making of amends. These four steps can take 30 minutes, 30 days, 30 months, or 30 years.

The ethical imperative upon which Unitarian Universalist theology could be based is forgiveness. Can we forgive ourselves for our involvement in actions, policies, and laws that are unjust, for the times we have contributed to relationships in ways that made them inequitable, and for the attitudes we have manifested which have been disrespectful. Once we can forgive ourselves and take responsibility for the mistakes we have made, the evil we have perpetrated, then, with a humble and repentant heart, we can forgive others.
Posted by David G. Markham at 7:00 AM 2 comments