Akilter - The importance of potlucks in Unitarian Universalism 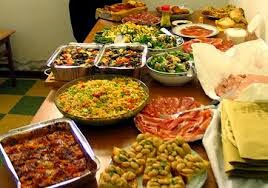 Beecham, MA - The Unitarian Universalist church is holding a pot luck supper this Friday night. Craig Barlow stated that he is really looking forward to it because Mrs. Wilsey will be bringing her green bean casserole which she makes with mushroom soup and bacon bits. "Everybody has their favorite dish," said Craig, "which is what makes it so wonderful. This is the main reason why I love this church - its pot luck dinners."

The UU church is a small church, they are lucky if they get 15 people to a service, but usually the number at the pot lucks doubles because church members come and bring friends. "We don't have a minister," said Lynette Wilsey, "because we can't afford one, but who needs a minister, really, when you can have pot lucks?"

Besides the food itself, the pot luckers say, they enjoy the fellowship, the gossip about what's going on in town, and the men talk about the Patriots football, but outside of that we stay away from topics that might be divisive like politics and religion. "We just get together to enjoy the food and each others company," said Heather MacNamara who is the youngest member of the congregation at age 47.

"Unitarian Universalism is a dying denomination," said Doug Anderson, "because we don't believe in anything other than being nice to each other, and you know what they say about 'nice guys finishing last.' A way to a man's heart is through his stomach so we consider our potlucks outreach, you know, missionary activity of sorts." Fred Dickson weighed in, "God, in whom we don't necessarily believe, would, I think, be very pleased because we get along together, and as Jesus told us, to love one another."

"Mrs. Wilsey's green bean casserole is made with love," said Craig. "I can taste the love in the beans and that's what church is all about."
Posted by David G. Markham at 11:17 AM 0 comments