Awareness of the evolutionary trajectory of humanity provides great hope. 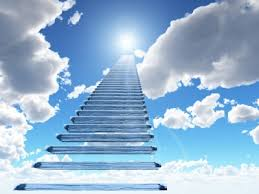 The evolutionary progress has been uneven and variable from culture to culture until the birth of the internet which made tangible what deChardin called the noosphere. With the global communication we have now human consciousness has been raised significantly and now humanity knows within days things going on in various cultures around the globe which previously took centuries, then decades, then weeks, then days, and now hours to become aware of.
We are living in a truly miraculous time of spiritual awakening and slowly are becoming aware of it. Part of the cultural distress that people are experiencing in this post postmodern age is the forced awareness of our shadow side as human beings. This distress of our shadow side provides motivation for significant positive change.
Keep the faith moving forward,
Posted by David G. Markham at 8:18 PM 0 comments