Lenten Reflections, Second Wednesday of Lent, The dark night of the soul. 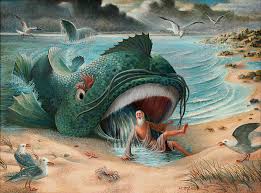 Day eight, Second Wednesday of Lent
The dark night of the soul
Luke 11: 29-30
29When the crowds were increasing, he began to say, “This generation is an evil generation; it asks for a sign, but no sign will be given to it except the sign of Jonah. 30For just as Jonah became a sign to the people of Nineveh, so the Son of Man will be to this generation.

In reading the Lenten Reflections it helps to be religiously literate. The reference in Luke 11:29 - 30 to the story of Jonah makes no sense to the reader unless they know the story of Jonah who was swallowed by the whale and lived in darkness until Jonah was regurgitated and given new life.

What happened to Jonah can be thought of as a metaphor of the dark night of the soul when a person gives up the world of the ego and is left in darkness. The person has given up their social conditioning and no longer is a slave to the idols of the world. The person is a caterpillar who finds themselves in a cocoon and then emerges into the new life of the butterfly. Luke tells us that this is what happened to Jesus during his 40 day fast on the mountain side from which He emerged like Jonah from the belly of the whale to begin His ministry proclaiming the world of the Spirit as compared to the world of the ego.

Not everyone has a dark night of the soul experience, but depression and anxiety and even despair are very common in our present age. Many people become disillusioned, bitter, remorseful, angry, resentful, and full of grievance. What is on the other side of this depression if not death by suicide?