Going to church for the kids? 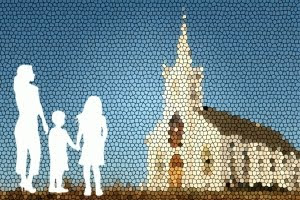 On April 25, 2010, Jane Roper wrote a witty and clearly expressed article entitled "Why I finally joined a church." on Salon.com

She joined a UU church.

Why do people want things for their children which they find irrelevant for themselves?

It seems pretty shallow to me, and condescending, and patronizing.

It's as if parents say, "I know this is silly and it means nothing to me, really, but the kids should have something to say 'no' to like I did."

My children, in spite, of my attempt to provide a religious upbringing are secular humanists for the most part.

They are bright, accomplished, productive, good people. They are good parents and love their children and are raising them well but have no use for religion themselves or for their children, my grandchildren.

What would happen if we banned children from religious training until they are 18? I think trying to educate children in religion is a waste of resources and energy. They will learn what they need to learn from watching their parents, not from institutionalized training.

Hey, if Jane Roper wants to go back to church, more power to her, but please don't do it for your 3 year old daughters. Spare them.
Posted by David G. Markham at 7:00 AM