New To Town, the film 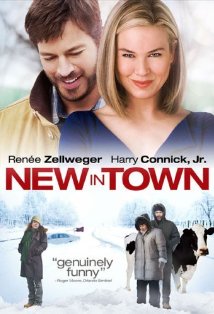 I am a sucker for any film that Renee Zellweger is in and in this film she melts my heart and makes me love her even more. Here is the synopsis of the movie, New In Town, distributed in February, 2009,  from the Internet Movie Database:

A high-powered consultant in love with her upscale Miami lifestyle is sent to a middle of nowhere town in Minnesota to oversee the restructuring of a blue collar manufacturing plant. After enduring a frosty reception from the locals, icy roads and freezing weather, she warms up to the small town's charm, and eventually finds herself being accepted by the community. When she's ordered to close down the plant and put the entire community out of work, she's forced to reconsider her goals and priorities, and finds a way to save the town.

It is a film depicting corporate vs. human values. In a simplistic and comedic way you watch the heroine Lucy Hill (Renee Zellweger) struggle with this values.

This film is a romantic comedy and entertaining enough, and at a deeper level depicts cultural and moral values that have beset America in the first decade of the 21st century.

I recommend the film. It might be a discussion starter for the topic on capitalism and human values.
Posted by David G. Markham at 6:28 PM