It is the ultimate irony for Former President George W. Bush that Christians were much safer in Iraq under Saddam Hussein than they are under United States occupation.

Unitarian Universalists value the right of conscience and the use of the democratic process within our congregations and society at large. President George W. Bush kept changing the rationale for invading Iraq from to eliminate WMD to bringing freedom and democracy to Iraq. Cheney said Americans would be welcomed as liberators. Both men lied to the American people. Iraqi Christians have fled Iraq in fear of loosing their lives for their religious beliefs. Iraq is anything but a free and democratic nation. 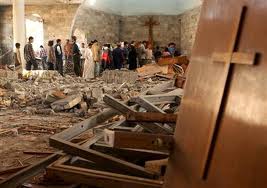 What have Americans fought, died, and been injured for? Certainly not for the freedom to practice one's religious faith in peace and freedom.
Posted by David G. Markham at 7:00 AM