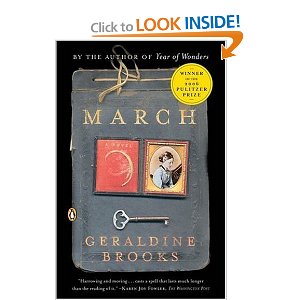 At the Brockport Unitarian Universalist Fellowship we have a book discussion group which meets once per month in the basement of the Lift Bridge Book Shop in Brockport, NY on the second Tuesday of every month at 6:30 - 8:00 PM.

This month we will meet on February 8, 2011, to discuss March by Geraldine Brooks.

Brooks describes what Mr. March was doing in the Civil War when he left his wife and four daughters in Concord, MA immortalized in Louise May Alcott's novel, "Little Women".

Mr. March is Reverend March, a Unitarian minister who is a contemporary of Emerson and Thoreau and who leaves his family to provide chaplain services to the Union Forces during the first year of the Civil War.

The themes are perrenial such as the abandoning family to serve one's country, and the sadism and evil of war.

I liked the book and found it very readable.

The moral of the story is that war is dehumanizing and tortures human souls in a hell on earth not only in the war itself for the soldiers but also for the family left behind.

I recommend the book.
Posted by David G. Markham at 2:03 PM

Email ThisBlogThis!Share to TwitterShare to FacebookShare to Pinterest
Labels: Books