Unitarian Universalism does not "embrace many different beliefs." 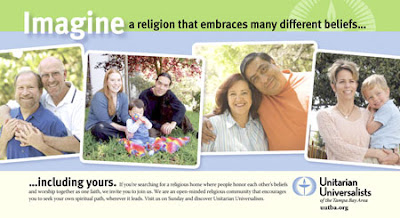 I wonder how successful this campaign was. I have my doubts that it was effective. It is confusing. "Imagine a religion that embraces many different beliefs." I can't. And I don't think, at its core, that's what Unitarian Universalism is. I think the tag line is misleading and people sense this.

A more effective approach might have been to promote something like "We support the free and responsible search for truth and meaning and know that there is no certain answer to the question of what is the ultimate reality." or Francis David's statement that we need not think alike to love alike and we have our 7 values, principles, beliefs if you will that we share in common.

I am a member of the Brockport Unitarian Universalist Fellowship, an emerging congregation. I promote our 7 principles and our 6 sources. UUs don't just believe whatever they want. We have a covenantal faith which says we will support each other on a spiritual journey and there are many paths to enlightenment.

I love our UU faith. It is deep and substantial and we have our agreements with each other to keep the faith around 7 very important and basic things. This idea that a person can just believe anything he/she wants is wrong, inaccurate, misleading, a trick.

For example, UUs believe in the inherent worth and dignity of every person. We would not have done well in the anti Semitic times of Nazi Germany and we don't do well in the discriminatory times of Arizona. We don't send people to hell, wish them to hell, exclude them to hell, banish them to hell like many religions do. We don't believe in exclusion and banishment. So we don't "embrace many different beliefs". In fact UUs are different, refreshingly different, with something of great value to offer the world.