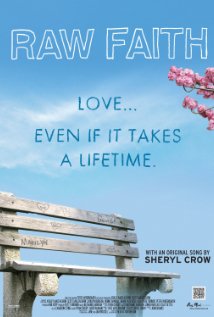 Last night I watched the documentary, Raw Faith, which is about Rev. Marilyn Sewell's life as the Unitarian Universalist pastor of First Unitarian Church in Portland Oregon for over 17 years.

During those 17 years Rev. Sewell grew the congregation to over 1, 000 people and in spite of her personal demons and insecurities nurtured a congregation with integrity and love. As she realizes that her time of ministry is coming to an end she makes the courageous decision to resign while she is ahead and begin a new chapter in her life to which she feels called, but not knowing exactly what God is calling her to do next.

Having created the space for God's grace to operate, and quite unexpectedly, for the first time in her life, Marilyn falls in love with George, a widower of many years. Marilyn is scared of her feelings of being loved by George because of previous abandonments and emotional abuse. Can she open herself up and make herself vulnerable?

With the help of her Spiritual Director, Marilyn overcomes her fears of intimacy, and allows George to love her and at the end of the film they marry.

In the bonus features on the DVD with the film, Marilyn discusses many aspects of the UU faith very articulately.

I liked the film much better than I expected. It is a film for older people over 50 who are reflecting on the meaning of their lives up to mid life and where to go from there. It is also a film for workaholics and high achievers who have been driven to prove themselves because of insecure childhoods. As Tim Robbins said one time, "It is never to late to have a happy childhood." Marilyn Sewell can be a poster child for that idea. She lives a very productive and satisfying life based on "raw faith". I highly recommend this film.