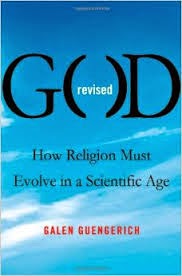 The book this month for discussion on UU A Way Of Life has been God Revised by Galen Guengerich and next month, July, 2014, which starts tomorrow, we will be discussing Flight Behavior by Barbara Kingsolver.

The reason I chose God Revised to discuss this month is that I received a copy from my daughter, Maureen, who bought it at the First Unitarian Universalist Church of Ann Arbor when Rev. Galen Guengerich visited there to preach and, apparently, do a book signing. The book which my daughter gave me is inscribed, "For David, With gratitude!, Galen" and I don't even know the guy. Why he is grateful to me, I have no idea other than that my daughter bought one of his books for me and so I am the reason for another sale. Is this too cynical?

I obviously read the book since I chose it for discussion and how could I discuss it intelligently and be honest with my readers had I not? I'll tell you something important - readers bring as much meaning to the text as is in the text itself and so every reader might get something different from the reading of a text not because of what the text says, but because of what is in the reader's mind, and heart, and experience already. My mind, and heart, and experience is pretty corrupt so far be it from me to tell you what Galen (did you notice we are on a first name basis?) intended to say, said, or will say to people who read his book in the future. Without being impertinent let me say, if you want to know what Galen Guengerich thinks about a revised god, read the text yourself and let me know.

Maureen asked me once, "How did you like the book, Dad?" At the point she asked the question, I hadn't read it yet but I did appreciate the gift and her thinking of me. Now that I've read it I'd say, "Mehhhh".

Guengerich, imposing Fowler's model of faith development on the purpose of his book, is trying to get the reader to move from Fowler's stage 3 "Synthetic-conventional" faith to stage 4, "Individuative-reflective" and maybe even to stage 5, "conjunctive", and stage 6 "universalizing". Already being at stage 5 and 6 myself, I get Guengerich's points, I think, but someone at stage 3 or lower would find his book shocking and disconcerting if not blasphemous.

So the questions become "Who is Galen writing his book for? Who are his intended audience?" My guess is that Galen is singing to the choir, he is preaching to the converted, teaching the educated and with this crowd, God Revised may be a disappointment. Galen is moving into mystical territory without being a mystic. He is trying to describe things he doesn't seem to know of, or if he does know of them, he fails to appreciate. The book is a hodge podge of autobiography, cultural references, philosophy, half-baked theology, and it seems to hang on the idea of religion being based on an ethic of gratitude which misses the whole deeper observation of the perennial philosophy that human beings are broken, imperfect, sinful, and need to repent, forgive and be forgiven, and redeem themselves and each other. How can gratitude be the grounding ethic when a much more fundamental factor in human experience is suffering?

Unitarian Universalism doesn't do well explaining human suffering and sin. It is too liberal, too Pollyannish, looking, unfortunately, at the world with rose colored glasses. It's not that gratitude isn't nice and important and lovely, it is, and it is nice that Galen points that out and expresses gratitude to me for being the reason that he sold another book, but when he inscribes, "With gratitude!" he is overlooking my pain, my suffering, my fears, my griefs, for crying out loud the guy doesn't even know me. "With gratitude!" is like saying, "Have a nice day!" and I grumble to myself "Don't tell me what kind of day to have!"

I am grateful to Galen for writing this book. Will it get many 3s to 4? Maybe. If so, it will be a worthwhile service, but if you are already a 4 or 5 or 6 you will find little here worth spending your time with.
Posted by David G. Markham at 10:51 AM