If you would have gratitude, first seek forgiveness. 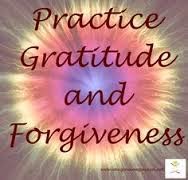 Galen Guengerich's ninth chapter in his book God Revised is entitled, "What We Owe: An Ethic Of Gratitude" he writes: "For an ethical imperative to have relevance in the modern world, it needs to be more like the law of gravity than the Ten Commandments: grounded in the nature of things, not in a supposedly divine set of commands developed three thousand years ago." p. 175

Rev. Guengerich writes a bit further, "In many cases, of course, we exercise our agency more through the institutions we sustain - including our religions - than through discrete personal decisions." p.182

I saw a bumper sticker today, Sunday, 06/22/14, about 3:15 PM, on the back of a Dodge Caravan with a Marine Corps logo on it that said, "Thank a soldier for your freedom." I immediately felt angry and muttered to myself, "Fuck no!" "I don't owe my fucking freedom to no god damn Marine who has chosen to provide himself a fodder for what the Pope and other of the major world religious leaders called immoral wars in Iraq and Afghanistan and before that Viet Nam. I am not grateful that somebody's kid is off killing people in foreign countries in my name under the guise of giving me freedom.

"This state-of-nature point of view - every person pursuing his or her own interests alone - is both descriptively wrong and theologically demonic. In fact, we owe everything to the people and the world around us. My freedom to flip on a light switch, open the faucet, turn on the television, pour a bowl of cereal, unlock the door, drive to work, deposit my paycheck, make a phone call, check a website, get a physical - the list could go on forever - is strictly contingent. I cannot do any of these, things, at least nothing will happen if I do, unless a lot of other people have done a lot of things upstream, including making laws and regulations. In this sense, my freedom increases only as the people and the world around me expand my ability to choose and act. Freedom is a function not of independence but of reciprocity. Our freedom to create more value in our own lives depends, ultimately, upon our commitment to use our agency to create a world that contains more value for everyone else as well.". 181

A little further Rev. Guengerich writes, "Gratitude becomes an ethic when we respond to this awareness by using our freedom as moral agents to nurture the world that nurtures us in return." p.181

Rev. Guengerich may well be right for advanced, mature souls, but not for fearful people who have been frightened by "terrorists" and who give up their moral agency in return for supporting soldiers to go kill people to keep them safe. Should we be grateful to these soldier/killers for our freedom? Our government and the military/industrial/governmental complex would have us believe this and act on it by paying our taxes and lending our political support to the self serving policies of the power elites and their syncophants.