Learning what love is 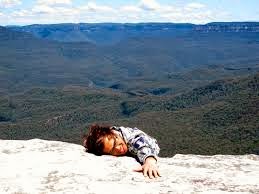 "But still I know this is no sudden thing: my father spilling his guts to these German strangers. He has dragged himself, inches at a time, over to the cliff's edge and, head heavy, tumbled over. That is how it's done. A person doesn't run a mile to reach the edge and hurl himself into the void that ends in jagged rock below, for the simple reason that by the time you've reached the edge, you're winded, and you stop just shy to catch your breath and reconsider. The ones who take the plunge make camp just crawling the distance from the edge and every day inch closer, living in a place where tumbling over - be it suicide or saying all - is not a great departure from the routine." pp. 5-6

Linda McCullough Moore, "That's a Fact" in This Road Will Take Us Closer To The Moon.

The straw that broke the camel's back is down the road. It will only be a matter of time before it lands on your back. People will say you are over reacting, the object of your complaint trivial, only a little thing. You are silly to let such a trifle upset you so. But they have no idea. They haven't really been listening, and even if they did so what? They couldn't or wouldn't do anything about it anyway.

It takes awhile to get to the edge, and gratitude for life's gifts is absent having been ground down to believe one is not worthy. The only redemption is in forgiveness and generosity, then comes gratitude, but when one is on the edge a significant act is imminent whether it be death and mayhem or finally letting the cat out of the bag, calling a spade a spade, and taking the bull by the horns. Which will it be? No matter, cause afterwards, life will not be the same.

If a person knew that he/she had inherent worth and dignity, and even more importantly knew that other people who knew them, knew and thought that too, then things will go better, but without this knowledge, tragedy is more likely.

True religion is for those who know that every person has inherent worth and dignity and they not only bring people back from the edge, but provide hope and support in learning what Love is, taking life to a whole new level.
Posted by David G. Markham at 7:00 AM