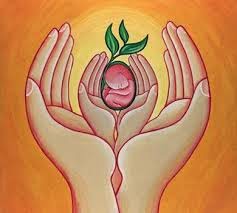 Rev. Ken Collier describes in his book, Our Seven Principles in Story and Verse, the idea of redemption as having two meanings: "bought back" as in Jesus death on the cross to redeem humankind for their sins to make things right with God, and as in "fulfilling a promise" as in redeeming a coupon or a bond. Rev. Collier prefers the second meaning as we remove the barriers and obstacles to our awareness of our inner Profound Beauty and redeem our inherent worth and dignity from the conditioning that prevents us from being aware of it.

Rev. Collier goes on to make an interesting observation and that is that it is hard to appreciate the Profound Beauty in other people until we can see and appreciate it within ourselves. In other words we can't give what we don't think we have, we can't share what we don't realize we possess. Collier writes:

"As far as I can tell, I cannot recognize the worth and dignity within myself unless I recognize it everywhere I may look, even in people within whom it is dark and hidden, rejected and forgotten... As far as I fail to recognize Profound Beauty in another, I fail to see it clearly in myself. As far as I deny it in another, I deny it in myself. The extent to which I affirm it wherever I look, for, as every religious genius who has ever lived has affirmed, the center of the universe is everywhere, not least in the hearts of every human being." p.19

Having been conditioned in a religion, Roman Catholicism, where I was taught that I was born defective, inadequate, corrupt because of Original Sin, I never thought I was good enough even when supposedly this original defect was fixed by Baptism. I was taught that my children had to be baptized as infants so that their original sin could be washed away and if they died could now go to heaven but if not would go to Limbo. These teachings might be considered part of what Rev. Marlin Lavanhar calls the "Original Lie".

Father Matthew Fox, the proponent of mystical Creation Spirituality was excommunicated from the Roman Catholic church for calling our births the "Original Blessing" not "Original Sin".

We all must decide if asked are we basically good, or basically bad? Unitarian Universalists have parted company with traditional Christians some time ago based on the UU idea of the inherent worth and dignity of every person. In referring to the first principle, Rev. Collier writes, "It has never been watered down. It has always called us to the very best and exacting standard: to redeem the promise of our birth by giving our flesh to the Profound and to call it forth from all human beings." p.19

Peace Pilgrim said that she looked for the "divine spark" in every human being she met, and focused on that. I have taken her metaphor and imagined blowing gently on the spark hoping to see it burst in flames or maybe, if the divine spark in me is burning brightly it will jump across the void and add fuel to the other person's fire.
Posted by David G. Markham at 7:00 AM