Co-creating with God the future of the planet

Dellarobia, Cub, Hester, Bear, and Bear's friend, Norm are still up on the mountain taking in the marvel of the butterfly roost in the trees intended for logging.

Bear exhaled a hiss of doubt. "What if they don't fly off?"
"I don't know." Cub still held onto Dellarobia by the shoulders. "Y'all just need to see the Lord's hand in this and trust in His bidding. Like she said."

At the end of this chapter, Chapter 2, there is quite a moving passage:

Hester's eyes dropped from her son's face to Dellarobia's, and what could possibly happen next, she had no idea. For years she'd couched on a corner of this farm without really treading into Turnbow family territory, and now here she stood, dead in its center. She felt vaguely like a hostage in her husband's grip, as if police megaphones might come out and the bullets would fly. Looking down at her feet made her dizzy, because butterfly shadows rolling like pebbles along the floor of a fast stream. The illusion of current knocked her off balance. She raised her eyes to the sky instead, and that made the others look up too, irresistibly led, even Bear. Together they saw light streaming through glowing wings. Like embers, she thought, a flood of fire, the warmth they had craved so long. She felt her breathing rupture again into laughter or sobbing in her chest, sharp, vocal exhalations she couldn't contain. The sounds coming out of her veered toward craziness.
The two older men stepped back as if she'd slapped them.
"Lord almighty, the girl is receiving grace," said Hester, and Dellarobia could not contradict her.p. 56-57

It seems not only Dellarobia, but they all are receiving grace as they wonder and marvel at the phenomenon of Mother Nature and must confront the choices involved in competing with other species for the scarce resources that all these species need for survival on this planet. 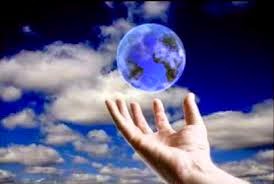 Humans, because of their consciousness and power of free will, have a greater responsibility for caring for the environment of the planet than other creatures. God has given us humans, the god like power to create or destroy. Cub tells his father, Bear, that they should trust in God's bidding, and not egotistically just destroy the habitat of another species for their own personal gain, money.

As we move into a geological era of the planet earth some have called the anthropocene, a geological era in which homo sapiens will determine the evolution of Gaia's development, we need to raise our consciousnesses so we can not only make wise choices, but change our patterns of living on earth to be respectful of the interdependent dynamics that maintain and promote good health and well being for all species.