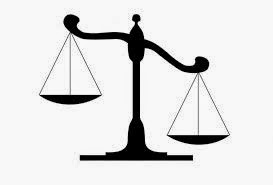 While justice is often determined by the laws of a society and is culturally determined, equity, fairness, "right relationship," as the Buddhists put it, is a different thing. Sometimes equity is just but often it is not. The rich getting richer and the poor getting poorer as is happening at an ever accelerating pace in America as well as around the world, based on a supposedly market driven capitalism, may well be just but it is not equitable.

Too often people are confused about the difference between equity and justice. Little children as they learn to talk and can put words together in a sentence will say, "It's not fair!!!!" Freud said it was the libido which makes human beings tick, but I think he got it wrong, it is not the libido, the sex drive, but the desire for equity, for fairness. We feel it in our viscera, our guts.

We put a certain amount into a relationship, a family, a community, a society and we expect a certain amount back and if we don't get it, we feel cheated, betrayed, disrespected, treated unfairly. There are certain relationships which by virtue of the nature of the relationships entail certain obligations such as between a parent and a child, a community and its citizens. Often times when we believe we have been treated unfairly we want to complain, "It's not fair!" and how often are we told, "Life's not fair. Suck it up. Quit your complaining." and yet at a deeper spiritual level even though we are silenced, we still harbor our resentments, our victimhood, our grievances, and unspoken, these resentments and grievances get acted out in sometimes terrible ways.

In a little different context the term "relational aggression" has come into vogue and the game often being played passive aggressively is that the players are following the letter of the law so they cannot be called unjust, but they eschew and deny the ethical obligations for equity, fair treatment. Sometimes the cry of "hypocrite" arises and if the person accused of hypocrisy is a person with power and high social status, the charge is laughed at toward the marginalized victim.

We struggle to make things fair. As Ivan Boszormenyi-Nagy, the psychiatrist who formulated the model of Contextual Therapy, taught us, it's like we have a ledger sheet with everyone we have been in relationship with. On that ledger sheet are our credits as well as our debts. We, as human beings, desperately want our ledger sheets in balance. If anyone owes us anything, we want to collect the debt. If we owe anything to anyone else, we want to pay our debt to "clean the slate" unless we are so psychopathic or narcissistic that we do not even acknowledge the debt owed. Before I die I would like to balance all my ledger sheets. I don't want to owe anyone anything, and I want to collect all that is owed to me, if reasonably possible. I can, then, die with peace of mind.

Consciously or unconsciously we spend our energy and time trying to balance our ledger sheets. It is a positive thing that Unitarian Universalism acknowledges that equity in human relations is an important responsibility for someone leading a spiritual life to acknowledge and maintain or rectify. In Christianity, the prevalent belief and attraction to the religion is the erroneous belief that Jesus made up for our sins and inequities by dying on the cross for us. The term for this belief is substitutionary atonement, and all too often relieves people of the guilt of knowing that they have made mistakes and failed to some extent in maintaining and working towards equity, fairness, in their relationships. Whether the doctrine of substitutionary atonement is a benefit to human relations or a barrier and obstacle to "right relationship" is for each one of us personally to determine. I think it is a barrier because it resolves me of responsibility having put the obligation on a magical man/god who has taken care of my obligations for me. On the other hand, the law of Karma would say that, in the long run, God, the Universe, our Higher Power looks out for us, and it all comes out in the wash whether in this life time or the next if you believe in such a thing.

Unitarian Univeralists usually don't believe in the traditional heaven where we go when we die. UUs believe that heaven is here on earth depending on what we make of our lives for ourselves and for each other. As Rev. Kaaren Anderson at First Unitarian in Rochester, NY says, "We, UUs, don't believe in getting people into heaven, but rather heaven into people." I would guess, if asked, Rev. Anderson, or any UU preacher might say, that the way to get heaven into people is to cultivate and maintain equitable relations with people, groups, societies here on earth. Are you being fair? How fair are your relationships with others? What can be done to rectify some of the inequities? Pick one and do it today, and tomorrow, etc.

Jesus says that unless we become like little children we will not enter the kingdom of heaven and what's the one thing that children are most sensitive to and want most, things to be fair.
Posted by David G. Markham at 7:00 AM