Sitting the death vigil for the extinction of a species 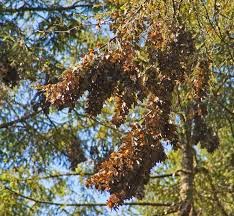 Dellarobia and Dr. Ovid Byron are up on the mountain collecting data. It had been cold the night before and there is a question of whether the roosting Monarch butterflies will survive. As the day warms up, melting occurs and it rains. They are standing under a tent like canopy to shelter a small work space. Here is how Kingsovler describes it:

Long clusters of butterflies began to drip. Hangers-on at the bottoms of their strings twisted slowly in an imperceptible wind, like the caricature of a hanged man. A chunk of a cluster near the shelter dropped suddenly to the ground, severed from the great beast. Grounded butterflies could not hope to lift themselves in a rain like this. She watched this fresh legion of the extinguished, taking their time to die.

"Nobody else came to the site today?" she asked.

He shook his head.

"I've left a couple of messages with Vern, but he doesn't call back. It seems like we're losing volunteers. Maybe they're having exams."

Ovid said, "Not everyone has the stomach to watch an extinction."

She noticed the fabric over their heads had begun to droop in spots where the rain pooled. The roof of their invisible house, collapsing. What wouldn't, under all this. She was slowly submitting to his sense that weather is everything. Not just the moving-picture view out the window. Real, in a way that the window and the house were not.

A scattering of butterflies in the fallen mass twitched open and closed, while getting pounded, showing their vivid orange a few last times. 'Rage, rage against the dying light.' That was the end of a poem, brought to her by the one bright spot in her education, Mrs. Lake, now dead. Dellarobia suddenly found she could scarcely bear this day at all. She stepped out in the rain to pick up one of the pitiful survivors and bring it under their roof. She held it close to her face. A female. And ladylike, with its slender velvet abdomen, its black eyes huge and dolorous. The probocis curled and uncurled like a spring. She could feel the hooked tips of the threadlike legs while they gripped her finger. She held it out and the wings opened wide, a small signal.

"So you're one of the people that can," she said. "Watch an extinction."

He did not quite break his communion with the day, his vigil, whatever it was, but asked, "If someone you loved was dying, what would you do?"
pp. 318-319

Most of us don't have the the stomach to watch an extinction so we watch sports, movies, anything to distract us from the reality of what is happening to our planet caused by us humans. We are in the geological age which Eugene Stoermer called the Anthropocene indicating the significant influence that human activity is having on the planet. Once we acknowledge and understand what the scientists are telling us about our impact, we have increasing responsibility to manage our relationship with the interdependent web in constructive, empathic, and loving ways.

Dr. Ovid Byron is sitting vigil over the possible extinction of a species, Monarch butterflies, which is happening at increasingly frequent rates to other species as well. The biodiversity of planet earth is being decreased and eroded because of the activity of one species, homo sapiens. The difference between our species and others is that we have consciousness, we know what we are doing if we choose to pay attention and take responsibility.

There is no other religious denomination that has the moral awareness of Unitarian Universalists of the relationship of human beings with the interdependent web other than Native American and Wiccan. We have ensconced our awareness and values in our seventh principle of respecting the interdependent web of existence of which homo sapiens is just a part. Unitarian Universalists, based on our faith, need to enhance our light to the world on the rightness of the respect and collaboration with Gaia if we are to survive as a species and continue to be the co-creators with God of the world being created.

We can sit the death vigil with Dr. Byron and express our grief for our sins, but this has little value unless we also repent and change the way we live on this planet. As Unitarian Universalist preachers are fond of saying, "May it be so."
Posted by David G. Markham at 7:00 AM