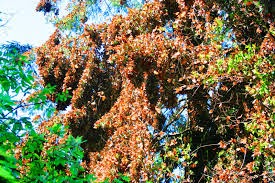 Does it seem odd that Flight Behavior by Barbara Kingsolver was chosen as a book to discuss for a month on UU A Way Of Life? It won't once you realize that the story told in Flight Behavior exemplifies the application of UU's seventh principle, "respect for the interdependent web of all existence of which we are a part."

Actually you might read the book and come away impressed that Kingsolver is a very spiritual person. Her characters grapple with real life challenges in applying the UU seventh principle as the story unfolds.

Dellarobia Turnbow is a forlorn young woman who marries her high school sweetheart when she finds she is pregnant. However the baby is still born, and with the reason and purpose of the marriage no longer applicable, Dellarobia stays with husband, Cub, anyway and as the novel opens she has had two more children with him, and is unfaithful to him, and is on her way to a tryst with her lover when an amazing event occurs which changes the course of her life.

Dellaborbio is hiking up a path in a forested area of the appalachian mountains in Tennessee behind her house to meet her lover in an old hunting cabin when she noticed unusual clumps of something on the trees and then:

"The forest blazed with its own internal flame. "Jesus," she said, not calling for help, she and Jesus weren't that close, but putting her voice in the world because nothing else present make sense. The sun slipped out by another degree, passing its warmth across the land, and the mountain seemed to explode with light. Brightness of a new intensity moved up the valley in a rippling wave, like the disturbed surface of a lake. Every bough glowed with an orange blaze. "Jesus God," she said again. No words came to her that seemed sane. Trees turned to fire, a burning bush. Moses came to mind, and Ezekiel, words from Scripture that occupied a certain space in her brain but no longer carried honest weight, if they every had. Burning coals of fire went up and down among the living creatures." p.14

What Dellabobia will eventually find out is that she is seeing Monarch butterflies, millions of them, coming to Tennessee for their winter roost instead of their usual winter roost in Mexico because of climate change.

Human beings, in their hubris, think they have dominated and can control Mother Nature until Mother Nature teaches them different. It is humbling, staggering, maybe frightening, and we are left with nothing to say or think but "Jesus God" as Dellarobia did, even if we are not on good terms with either.

What we humans are doing to Mother Nature is horribly sinful and it has happened so slowly, unconsciously, incrementally since the beginning of the industrial age 200 years ago that we didn't even know what we were doing to our environment until now as the facts come in. As the symptoms of climate change are more apparent, and less deniable, we are left with Dellarobia with nothing to say but gasp "Jesus God".

Would that more of us on this planet would have a similar wake up experience and in our surprise awakening utter the same humble prayer. I haven't heard it uttered enough, and it is  attention getting to read a fictional character utter it. Would that in our Unitarian Universalist churches, as we find our own examples of environmental change, we humbly pray to our Higher Power whatever we conceive of he/she/it or nothing to be, because we will need a lot of help to adjust to the consequences of the damage we have done. May God have mercy on us.

Galen Guengerich whose book, God Revised, was discussed on UU A Way Of Life last month suggested that a foundational ethic for a new religious movement might be gratitude. While that might be helpful, it is limited without repentance and acknowledgement of our sins which we have committed either knowingly or unknowingly, but what we knew and when we knew it, Mother Nature has no interest in. The bad karma is based on actions not necessarily intentional or malevolently motivated. Now that we know, to beg for mercy seems an appropriate response to the advancing environmental changes we will see with the terrible consequences for human beings and other living things.