Venal or precious, secular or holy? 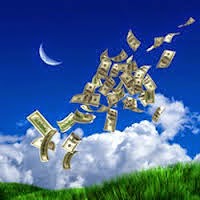 From Chapter 4 of Flight Behavior by Barbara Kingsolver:

"I didn't mind when it was just people from church coming up," Hester complained to Valia, "but now everybody and his dog wants the grand tour. After it came out in the paper. It was about thirty of them up her the Friday after Thanksgiving. I want to tell you! That's not normal, for the day after Thanksgiving."
"No, it isn't," Valia agreed. "People should be at the mall." p. 77

Laugh if you want but this is portrayed as serious conversation between two working class, white, women in Tennessee who have bought into the American dream of rampant materialism and the holiest of High Holy Days, Black Friday, is being eschewed in favor of tramping up a mountain side to view the winter roost of a wonder of nature, Monarch Butterflies. To the worshipers of Mammon this appears blasphemous and sacrilegious. We have become so inured to our materialistic values that this behavior of communing with nature and reverencing the works of Mother Nature seems unnatural and dysfunctional and both Hester and Valia agree that going to see butterflies instead of to the mall the day after Thanksgiving doesn't seem natural.

However the venal impulse and mercenary values are so deeply ingrained that Crystal says to Hester, "Here's what you ought to do, about all these people coming up? You should charge them."
"See, that's what I told Bear," Hester said. "We both think that."
"What's stopping you, then?" Valia asked.
Hester raised her eyebrows and pointed her chin at Dellarobia, as if her daughter-in-law were a child, oblivious to the codes of adults.
"Hey, don't look at me. Your son's the one that spilled the beans in church, blame him." Dellarobia got up and dumped an armload of tied bundles into the sink. Brethren, fix your thoughts on what is true. Bobby's (the pastor) words came to her out of the blue, and she nearly spoke them aloud. Instead, she said, "Let's blame Bobby Ogle, while we're at it. And Jesus, why not Jesus? Credit where credit is do."
"Missy, you are asking for it with talk like that."
"It's Mrs. And you know what? I never said it's the Lord's divine hand at work up there. Go ahead and charge people if you want. Why wouldn't you?
Hester met her eye, and they held a moment in deadlock. The words born again rose to Dellarobia's mind, and she contemplated a world where Hester no longer scared her. To turn her back on permanent rebuke, and find motives for living, wouldn't that be something. Like living as a no-heller, as Bobby was said to be." pp.81-82

The worlds of Mammon and Mother Nature, venal and precious, secular and holy collide and while Dellarobia won't take full responsibility but deflects it onto Bobby Ogle, the pastor, and sarcastically onto Jesus she none the less somehow finds the courage to stand up to her mother-in-law by whom, previously, she had always felt intimidated, and assert a different view based on different values than those of her mother-in-law and the materialistic, secular world she found herself ensconced in.

While on one level it seems like an important and reasonable thing to do, protect the habitat of the butterflies, human beings have been used to the idea for the last 2,000 years, and especially the last 200 since the advent of the industrial age that the environment be damned. It is there simply for the pleasure and the profit of human beings and God, in the story of Genesis, has given homo sapiens the permission to dominate Mother Nature to their will and to do with her as they would including pillage and rape. These women appear to have an intuitive inkling that this attitude is corrupt and evil and, while they discuss the possibility of taking monetary advantage of the situation. they feel guilty in the presence of Dellarobia, and the religious and spiritual discourse which has been brought to the situation.

Jesus has said in Mark 6:36, "What good is it if a person gain the whole world, but forfeit his or her soul?"

As Unitarian Universalists, a people of faith, we get the point, we see the issue, we reverence the interdependent web at least in our words if not always in our actions. Would UUs stand with Dellarobia in solidarity, be supportive of her newly found values, be a witness to the quandary the women, the Turnbow family, the community, and the world find themselves in? I would hope so, and hope is an important initial motivation for faith as one embarks on a new and better path even if it is not always clear where this path is taking the person.