Story of the day - What's with the Hummer? 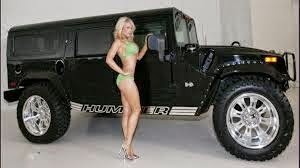 Carl told his wife, Sally, that when he retired from the police force he was going to buy a Hummer.

"Why on earth, would you do that?" asked Sally. "Stick with the penis enlargement potion you bought from the internet. You don't need a Hummer to satisfy me."

Carl laughed, "Satisfying you is the last thing in the world I worry about, honey. It's the neighbors and the guys on the force I want to impress."

"With a Hummer?" Sally said incredulously.

"It's what they're in to," said Carl, "force, strength, power. Driving a Hummer is making a statement that I'm not washed up now that I am no longer on the force."

"What is this, Carl, a mid-life crisis?" asked Sally.

"Whatever," said Carl looking down no longer seeming so sure of himself.

"What do you think the people at church will say?" said, Sally. "I'll tell you right now, I'm not riding with you to church or anywhere with you in that thing."
Posted by David G. Markham at 7:00 AM