Akilter - Pope Francis may be a universalist 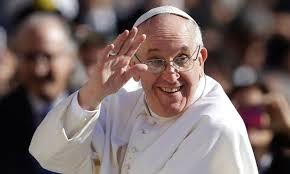 Vatican - Cardinal Scariemando told Akilter, off the record on Friday, that Pope Francis has confided in him that he really is a universalist. Cardinal Scariemando said that the Pope wishes he could come out of the closet on his true beliefs but he fears that this would be pushing the church too far given all the other changes which he is also making.

Scariemanda said that Francis told him that he believes in a God that is all loving and would not consign any of God's creatures to hell eternally. Scariemando said that the Pope told him, "We make our own hell. God has nothing to do with it."

Scariemando said that the Pope is very aware that the church could not have become what it is today had it not put the fear of God into people and convinced them that only the church and its priests could save them from eternal perdition. "This belief starts right at birth with original sin," said Scariemando. "So we've got them in our control right from birth on. Even at conception we have people shamed by sexual sin. You have to admit that the Catholic church is a marketing genius."

However, as humanity has matured and more and more people are becoming "nones" that is, they don't believe in any religious myths, we have lost our credibility with these toxic stories of original sin. "It was good in Augustine's day, I guess," said Scariemando, "but it has outlived its usefulness and Francis knows this."

"Once you float the idea of universality," said Scariemando, "people can do whatever they wish with impunity. They no longer need the church. The jig is up. Game over. So Francis keeps his personal beliefs under his Papal Mitre."

One of the board members of the UUA said, "I like Pope Francis, I really do, but he is about 500 years behind us. The UUs are way ahead of him and we welcome him. Better late than never. We will help him in any way we can to get the church to catch up to postmodern awareness. Humanity is not free until all of humanity reaches the cosmic consciousness that we all are one with Life. Really, how it could be any other way?"