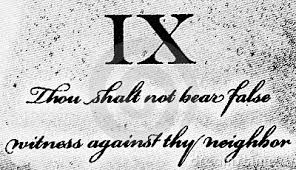 People are taught in our Judeo Christian society that it is wrong to lie. It is the ninth of the ten commandments, "One shall not bear false witness against one's neighbor." Donald Trump has born false witness repeatedly when he accused Barack Obama of not being in the presidency legitimately because he was not born in the United states when it has been well established that Barack Obama is an American citizen having been born in Hawaii from a mother who was an American citizen.

Why would Donald Trump lie about Barack Obama's birthplace over the course of many years? He benefited from the lie politically as polls show that as many as 72% of Republicans believe this lie which is called "birtherism." Trump's lies have been fueled by cable news stations so often that people skeptical have come to believe the lies because of the the repetition.

Donald Trump birther lie is not only in violation of the ninth commandment, it is also in violation of the second and fourth principles of Unitarian Universalism. UUs covenant to affirm and promote justice, equity, and compassion in human relations and the free and responsible search for truth and meaning.

Since it is one of UUs principles to engage in the free and responsible search for truth and meaning, it is incumbent upon us as UUs to witness to the truth and to denounce falsehood especially when it is manipulatively disseminated for personal gain of obtaining personal power over others at the expense of truth, equity, and compassion. The birther lie in and off itself has been disproved and can be put behind us, but what about the character of the person who has promoted such harm? Has he taken responsibility? Has he apologized? Has he done anything to repair the years of harm that has been done to the President and to the American people?

As is stated by Mark Hertsgaard in his article in the October 10, 2016 issue of The Nation entitled, "Trump's Media Enablers," "The birther issue goes beyond mere partisanship and the strong differences between Trump and Clinton on specific policy matters like climate change and Obamacare. It raises fundamental questions of democratic governance and national identity: Is the United States still a nation of laws or, as many Trump supporters apparently believe, a tyranny of stealth?" It may be that Hertsgaard meant "deceit" instead of "stealth?"

As UUs we also covenant together to affirm and promote the right of conscience and the use of the democratic process within our congregations and in society at large. Democracy does not work well when people lie to one another especially its aspiring leaders. Democracy breaks down when such egregious lying is not recognized, acknowledged, and repaired.

It is necessary for UUs to bear witness to the harmful behavior that has been engaged in and to work, as each as able, to repair the harm that has been done not only to the President but to the citizens who lawfully elected him by participating in their democratic franchise of voting for him. It is apparent that harm has been done to our democracy by the lies perpetrated by Donald Trump and his failure to take responsibility for his lies and apologize makes him unfit for the Presidency.

While Jesus told us to render unto Caesar the things that are Caesar's and to God the things that are God's, there is an overlap rather than a clean dichotomy, and it is clear that liars do not engage in God's work and should not be given positions of leadership.

For more on the Hertsgaard article in The Nation click here.
Posted by David G. Markham at 2:29 PM