Does Donald R. Trump promote the teachings of the Anti- Christ? 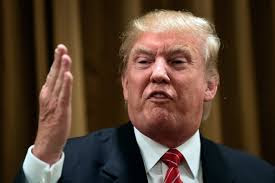 The White Supremacist rally and violence in Charlottesville should come as no surprise to people who have watched Donald J. Trump's presidential campaign and presidency. Trump has consistently engaged in hate speech and promoted an ideology of racism and xenophobia which has attracted and gained the support of people who live in fear of being marginalized and disenfranchised by people that they perceive as "other." His marketing slogan of "Make America Great Again" gives whites the hope of returning to an era when America engaged in enslaving and subjugating people based on racial and ethnic characteristics.

The desire for power and superiority as a means of dominating others is a sickness that infects not only the United States but other countries as well, indeed, most of humanity and other animal species. Most animal species have the so called "pecking order" and Donald J. Trump's appeal is enhanced with his tough guy projection of the Alpha male. This projection of an Alpha male persona is very attractive to people who desire to be protected and lead, and relieved of responsibility for initiative and self awareness.

In some circles the persona of Donald J Trump has been called the persona of the Anti-Christ because of the qualities and beliefs he manifests which are at odds with the teachings of Jesus and other enlightened beings. To beings of higher consciousness, the dichotomy which Donald J. Trump's teachings and behavior present to the spiritual teachings of Jesus and other spiritual teachers are apparent, and a cause of concern because of their appeal to beings of lower consciousness who have been infected by virulent values which lead to the harm of the Body of Christ and the At-One-Ment of  existence created by the Spirit of Life.

The incentive for the development and maintenance of a racist and exclusionary value system is the desire for power. This desire for power is the driving force and energy of the ego which wishes to exalt in its willfulness, which it calls freedom, to do as it pleases. Any restrictions or constraints on this willfulness, aka freedom, is interpreted as a threat, and the source of the threat is attacked to diminish or eliminate its constraint.

As so it is that the less conscious attempt to hold on to or regain that which was never theirs truly but only criminal behavior justified under the self serving guise of freedom which was only theirs while they domineered, subjugated, and stole the dignity and respect of others whom they considered of lesser value and consideration.

Unitarian Univeralists and beings of higher consciousness appear on the horizon of history with a witness and voice so marginalized and silenced that it is hardly recognized let alone acknowledged and appreciated. And yet the witness, no matter how anemic must continue because it is a marker of sanity and the health of humanity that gives hope and satisfaction of a higher quality life of the spirit if not of physical well being.

Resistance to the teachings of the Anti-Christ is not enough. A more authentic vision of the real spiritual world must be promoted with a missionary zeal as long as life permits. So join us in promoting a vision of equality, respect, dignity, and justice for all. Simply put, love your neighbor and people more distant in foreign lands and sing with the Beatles, "Love is all there is."
Posted by David G. Markham at 7:00 AM