Could forgiveness be a practice in Unitarian Universalism to bring us to Love? 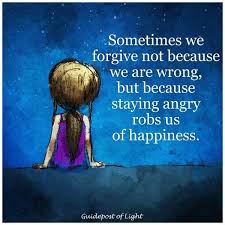 George you asked me what my most important spiritual practice is and I told you forgiveness. You asked me how that practice is engaged in. This is an excellent question and worth exploring because forgiveness is both the easiest thing in the world and the most difficult.

Forgiveness is difficult because our ego wants to hold on to resentments, grudges, and grievances because these negative feelings makes us feel more powerful, confident, and justified. Also, our grievances are embedded in our fears of being hurt again and still feeling wounded from past hurts. The ego thinks the way to rectify injustice and hurt is vengeance. As Gandhi said, "An eye for an eye makes us both blind."

There also is a misguided belief that vengeance is a deterrent to others committing future injustices. However, psychological and sociological research has demonstrated repeatedly that threats of vengeance do not deter the commitment of future injustice but seem to increase it. The explanation of this phenomenon can be based on the idea of separation in A Course In Miracles. Vengeance, engaged in or threatened increases separation and decreases the union of the Sons of God with each other and with their Creator. Perceiving the perpetrator as "the other" " and "not like us" makes it easier to engage in violent thoughts, words, and behavior.

What repairs separation and restores relationship and reunion is forgiveness. These principles are the basis of a model of conflict and criminal justice resolution called restorative justice. Restorative justice is another topic for another time so let is suffice for this letter to continue to focus on the idea of forgiveness.

Forgiveness is the letting go of the negative hurts of the past which are no longer present in the now except in our fantasies. These fantasies are comprised of what evil we think has been done to us. Our thoughts about this evil is based on our fears and these are based on fears for the body because nothing can harm our spirit without our cooperation and acceptance of the false belief in our spiritual harm. Who can harm us spiritually unless we believe this can be done? Jesus, as he is being executed, says, "Father, forgive them, for they know not what they do." It's as if Jesus is laughing at the absurdity of the idea that his executioners could rid the world of His ideas and love by killing His body. Didn't work, did it, George? Jesus' love and ideas are still here over 2000 years later. The attempt of evil to extinguish Jesus's love of God and us, His brothers and sisters, didn't work. What do you make of that? Seems miraculous doesn't it?

Forgiveness, George, is simply the rising above the physical, ego plain, and deciding to focus on the here and now reality of the spiritual plain which is the dimension of life which entails God's love and the union of the Sons and Daughters of the Spirit of Life. Where would you rather dwell, George, in the land of anguish, suffering, and victimhood, or the land of peace, contentment, joy and beloved son or daughter of creation?

The most important part of the practice of forgiveness George is to, as they say in AA, turn it over to your Higher Power, whatever you conceive your Higher Power to be. The other saying I like from AA is "Let go and let God." If Jesus can say as they are killing Him, "Father, forgive them for they know not what they do," why can't we do the same thing?

Forgiveness, as a spiritual practice, is just that, "a practice." We have to practice forgiveness. Some days we do better at it than others, but the key is patience and persistence. It usually takes repeated attempts to rise above past hurts and injustice and to focus in the here and now.

It is a disappointment that Unitarian Universalism does not articulate a practice of forgiveness more explicitly like other religions do. UU does not have rituals of confession, repentance, exoneration, and redemption and we are the poorer for it. Historically, especially in the Universalist tradition, there was a belief in the unconditional love of the creator and being loved unconditionally why would forgiveness even be necessary since sin is not seen as real or having a significance for eternal well being.

Bottom line, George, is to strive to live in the light, and to do that we must tune into Creations love for us so we can extend it to others. As UUs we covenant together to promote and affirm the goal of world community with peace, liberty, and justice for all. I think for UUs and others to practice this principle we must learn how to love and this requires the removal of the barriers and obstacles to our awareness of Love's presence and that removal is best accomplished through forgiveness.