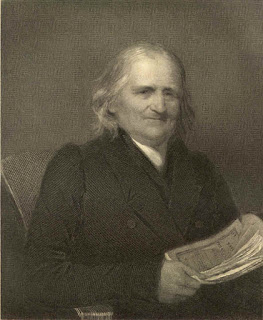 December 28, 1815, the Massachusetts Peace Society was organized by Unitarian Minister, Noah Worcester. It was the first peace society in the world. Rev. Worcester was called, "apostle of peace."

The Rev. Willian Ellery Channing gave the eulogy at Rev. Worcester's funeral in 1835. Here is part of what Channing said,

"He was distinguished above all whom I have known, by his comprehension and deep feeling of the spirit of Christianity; by the sympathy with which he seized on the character of Jesus Christ as a manifestation of Perfect Love; by the honor in which he held the mild,- humble, forgiving, disinterested virtues of our religion. This distinguishing trait of his mind was embodied and brought out in his whole life and conduct. He especially expressed it in his labors for the promotion of Universal Peace on the earth. He was struck, as no other man within my acquaintance has been, with the monstrous incongruity between the spirit of Christianity and the spirit of Christian communities; between Christ's teaching of peace, mercy, forgiveness, and the wars which divide and desolate the church and the world. Every man has particular impressions which rule over and give a hue to his mind. Every man is struck by some evils rather than others. The excellent individual of whom I speak was shocked, heart-smitten, by nothing so much as by seeing that man hates man, that man destroys his brother, that man has drenched the earth with his brother's blood, that man, in his insanity, has crowned the murderer of his race with the highest honors; and, still worse, that Christian hates Christian, that church wars against church, that differences of forms and opinions array against each other those whom Christ died to join together in closest brotherhood, and that Christian zeal is spent in building up sects, rather than in spreading the spirit of Christ, and enlarging and binding together the universal church. The great evil on which his mind and heart fixed, was War, Discord, Intolerance, the substitution of force for Reason and Love. To spread peace on earth became the object of his life."[1]

For more click here
Posted by David G. Markham at 10:11 AM