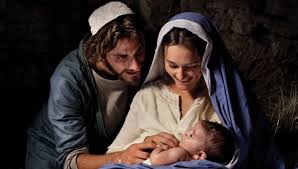 The Christmas story is rich. There is more of the story not said than is told. An intriguing part of the story is when Joseph finds out that his fiancee is pregnant with someone else's child. At the time, under Jewish law, this was a capital offense. Joseph could have had Mary executed.

It seems that Joseph is a good guy. He didn't want Mary killed. Did he love her in spite of her infidelity? His plan, it tells us in Matthew's gospel, was just to quietly divorce her. This would make Mary an unwed mother in those days even more suspect and reviled than in our contemporary age.

Joseph, decides, the story tells us based on a dream, that he will stick with Mary and this bastard child. What factored into the decision other than the intervention of the Holy Spirit we are not told. For Joseph, it as a package deal. He was taking on a pregnant teenage wife and her child. What a guy!

Joseph has no idea what he is getting in to. He will have to make an arduous journey to another town to pay his taxes, and then this baby will be born in a barn and he will have to scramble to attend to the needs of his wife and this child, and then he will have to flee to a foreign land and stay there as a refugee for 2 years. It is quite a mess.

Isn't that just how life goes? One damn thing after another? Sometimes it seems like it never stops.

Joseph, though, is a real man. He rises to the occasion. He does what he feels called to do in spite of the difficulties.

The Christmas story focuses on the birth of Jesus and the supporting roles of Mary and Joseph are marginalized and downplayed. But where would Jesus be without the two of them? Jesus would be nowhere without Mary, and Mary would be dead were it not for Joseph. Perhaps Joseph is the true hero of the story even though he seems a bit player behind the scenes.

There always is a back story to the main stories we tell about our lives. In this Christmas story, the back story is about true love of a man and a woman who entered into what A Course In Miracles calls a "Holy Relationship" distinguished from a "special relationship."

At this time of advent, we can reflect not only on the birth of a divine light into the world, but also on a love story between that child's parents. It is a story of true love of shared purpose to discern and do God's will. Were Joseph and Mary happy? I am guessing they were and it makes me happy to think about what they must of had together and what they achieved. Considering their love story is a magnificent joy during this season. It fills us with tenderness, peace, and comfort.
Posted by David G. Markham at 9:08 AM