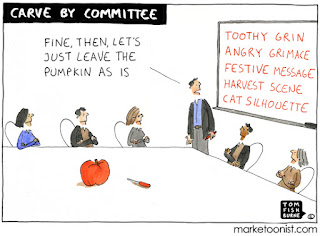 The social action committee at the First United Church of Holy Believers usually knew the right thing to do, that was not the problem.

The problem was how to do it.

Fred wanted to be nice.

Gladys wanted to be blunt and as she said, "Call a spade a spade."

The pastor, Beverly, wanted them to pray on it.

Bernie encouraged a "take the bull by the horns" approach.

Brian asked, "What would Jesus do?" You know, WWJD?

Don said the "time for talking is over. We need to do something."

Carol agreed but opined that now was not a good time.

Dennis said he didn't think they were ready to vote yet because more discussion was needed.

David said, "I have to get home. It's getting late."

John said he had to go too.

Linda asked if they could talk more about it next time.

The dwindling group decided this was best since they were losing their quorum.

The path to hell is paved with good intentions.

Pastor Beverly observed that the meeting had "moved things forward" and asked if she could get an "Amen" to that?

And that was that.

The more people think things should change, the more they stay the same.
Posted by David G. Markham at 4:42 PM