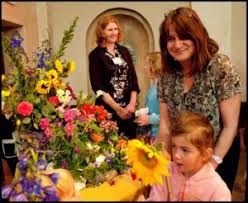 Brockport, NY - A Brockport man who says he was attracted to Unitarian Universalism reported he changed his mind last week when it was announced that the next week's service would involve flower communion.

"What the hell is flower communion," said Barry? "What ever happened to bread and wine?!"

"Is it  these female pastors? What will they come up with next," exclaimed Barry?!

Trying to calm Barry down and keep him involved in the church, Brenda told him, "They smell nice." Barry wrinkled up his nose and deliberately blew a fart.

"This is some kind of religion," said Barry.

"Better than dying on a cross, right," said Brenda?

"I have to use the rest room," said Barry who went out the front door and was never seen at that church again.
Posted by David G. Markham at 8:46 AM