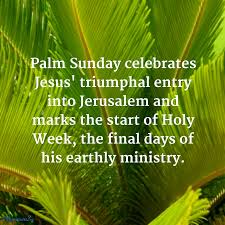 The sixth week of Lent begins with Palm Sunday which initiates Holy Week.

Palm Sunday is the triumphant celebration on the path of the ego wherein Jesus is acclaimed by the multitudes but it doesn't last long because within five days they will turn on Him and tell Pilate to release Barabas and execute Him.

The mob is fickle and can turn on a dime. Social status, the role of the celebrity, is an ephemeral thing which is counterfeit. It has no substance. It is for entertainment and amusement only.

The dark side of power also is a fearful thing which requires understanding, faithfulness, and Love to overcome.

Jesus set it up for people to acknowledge that He was bringing an important message to the world. The mob acclaimed and celebrated Him and then killed Him.

After He came into Jerusalem on a donkey to some applause and celebration,  He went to the temple and threw out the money changers and pissed off the religious leaders who ran the temple.

When it comes to traveling the path of the spirit, religion can be an obstacle. Religion can not only block one's journey, but actually attack the traveler who would dare question religious power and control.

Later this week, on Thursday we will celebrate the Last Supper. On Good Friday, we will witness Jesus' execution. On Holy Saturday, we mourn His death and wonder what will happen next. On Easter Sunday, we will learn of the resurrection of Jesus' spirit and we are filled with hope and Love for humanity.

We are grateful to Jesus for showing us the way. He demonstrated to us that there is a better way than the path of the ego. He preached about and manifested His life on the path of the spirit. Jesus told his disciples simply that the way to the Kingdom is to "love as I have loved."

Jesus manifested the Love of which He spoke. He was in Love with Life and that Love still radiates throughout the world over 2,000 years later.
Posted by David G. Markham at 1:20 PM