Notes from the mystical path - Smarter than Jesus 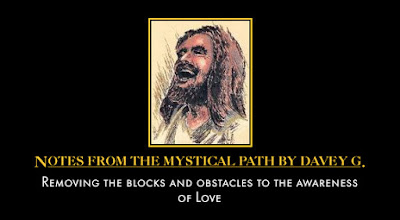 Notes from the mystical path of Davey G.

This evening a new feature is being introduced on UU A Way Of Life entitled, "Notes from the mystical path of Davey G."

Raised as a Roman Catholic and reading and studying religious and spiritual paths eclectically, his last sojourn in an organized religion has been with Unitarian Universalism. But outside of the transcendentalists, there is not much of a mystical tradition in UU, and so Davey G. told me he has been exploring the six sources and then some.

The mystic aspires to shed the ego and become one with Oneness and experience the nondualistic consciousness. Check the notes periodically to better understand and perhaps pursue the mystical path as well.

Davey G. called me to tell me he was sending the first note saying that he is smarter than Jesus and then laughed hysterically. He said he got the idea that he was smarter than Jesus from Osho, and then laughed some more. And then, Davey got serious, and said that while he might be smarter he was no where as wise and loving and still had a long way to go to achieve the loving oneness that Jesus experienced.

"Humanity now knows more than it has ever known before: knowledge goes on accumulating. In fact, you know more than Jesus. If you meet Jesus you can teach him many things. He will not know a thousand and one things. I don’t think he will be able to pass the matriculation examination – impossible! But that does not mean that he is not a knower. He knows, but in a totally different way. His experience has transformed his being.

He is not as informed as you are but he is transformed, and that is the real thing. Information means nothing. A computer can have more information than you have, but the computer can never become a christ or a buddha. Or do you think a computer can become enlightened some day? That is impossible.

A computer can know everything possible, but it will remain a computer and it will repeat only that which is fed into it. It cannot be blissful either – what bliss can a machine have? It cannot be loving either – how can a machine be loving? It may say, “I love you, I love you very much: I am ready to die for you.” It may say beautiful things, but they will simply be words. It can be taught to hug you and kiss you, but there will be no love at all. And you will know that this is just foolish – a machine kissing you and hugging you. You will look all around, embarrassed!

A machine can be taught these things and the machine can do these things very efficiently. But millions of people are doing exactly that: functioning like machines, computers. They repeat clichés – Christian, Hindu, Mohammedan – beautiful words, but all dead.

With me, it is not a question of becoming more informed. I am not a teacher, I am not here to teach you anything. On the contrary, I am here to help you unlearn – not to learn but to unlearn, so that you can be unburdened and you can start seeing on your own.

Osho. Last in the Evening: 365 Relaxing Moments to Enter the Night Consciously
Posted by David G. Markham at 9:21 PM

Email ThisBlogThis!Share to TwitterShare to FacebookShare to Pinterest
Labels: Notes from the mystical path