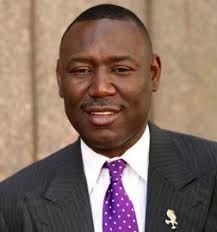 Attorney Benjamin Crump is on the front cover of Sojourners February, 2018 issue.

"This has become the African-American family emergency plan—set in motion when the “hurricane” is a white person with a gun. Call Benjamin Crump.


This is what Trayvon Martin’s family did in 2012 when they realized the criminal justice system would not punish the man who killed Trayvon. They called the lawyer who once stood on the steps of a courthouse where two white men had just been acquitted of beating to death a 14-year-old boy and said: “You kill a dog, you go to jail. You kill a little black boy, and nothing happens.” They called the attorney who, time and time again, tries to make something happen. They called Benjamin Crump.
In Trayvon’s case, Crump, one of the best-known civil rights attorneys practicing today, thought at first that something would happen without his help—since the only thing Martin had in his possession when George Zimmerman shot and killed him was a can of fruit juice and a bag of Skittles. When Crump realized there was a strong possibility that justice would not be served, he came face-to-face with what he calls “a test from God.”
For more click here.
Unitarian Universalists covenant together to affirm and promote justice, equity, and compassion in human relations. The work and life of Benjamin Crump exemplify this principle.
Posted by David G. Markham at 7:00 AM