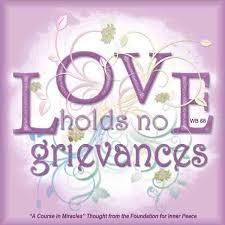 Grievances corrupt and are toxic to the person holding them. Playing the victim is deadly to spiritual health.

Holding grievances is the opposite of what Universalism teaches which is Unconditional Love.

When UUs hold grievances something has gone wrong with the covenant. There has been a breach in the rapport. The person holding the grievance has made a mistake in misperceiving his/her brother and sister, and no longer holds precious the person's inherent worth and dignity, the first principle of UU.

Forgiveness is the path to letting go of grievances. Forgiveness in this context is the taking the person where they're at and rising above any sense of victimhood knowing that we all are God's creatures.

Forgiveness does not mean not setting limits or accepting abuse. It means dealing with dysfunctional and toxic situations with love recognizing that attacks by others are calls for love.

We have expressions like "water off a duck's back," "rolling with the punch," "developing thicker skin," etc. Holding no grievances means living above it all, not in a dismissive, avoidant, or condescending way, but rather acknowledging the attack and not taking it personally, refusing to see oneself as a victim.

"Holding no grievances" is a decision we make, and a position we take based on a new understanding of who we are and the place we have in the interdependent web of God's existence.