Feds, under Trump, bring back practice of the death penalty. 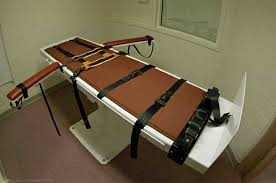 From the Washintgon Post on 07/25/19
The Justice Department announced Thursday that it plans to resume executing prisoners awaiting the death penalty, ending almost two decadesin which the federal government had not imposed capital punishment on prisoners.
Attorney General William P. Barr ordered the Bureau of Prisons to schedule executions for five inmates on death row. The prisoners were convicted of murdering children.
The Trump administration’s push to resume capital punishment in the federal system, while not surprising, goes against the recent trend of declining executions across the country.
The last federal execution was in 2003. In the years since, there has been an informal moratorium on executions of federal prisoners, as Justice Department officials reviewed its lethal-injection procedures. That practice was underscored during the Obama administration by then-Attorney General Eric H. Holder Jr.’s personal opposition to the death penalty, even while he approved prosecutors’ decisions to seek the death penalty in specific trials.
Editorial note:
Pope Francis declared last year that the death penalty was no longer permissable under Catholic teaching.
Back in the 1980s, Cardinal Joseph Bernadin popularized the concept of the "consistent life ethic" meaning that pro-life proponents to be consistent also should be against the death penalty, war, and euthanasia.
Republicans have always been very conficted and contradictory about the consistency of their pro life positions. This is very apparent now in the era of Trumpism as Republican states have passed legislation making abortion unavailable in their states but still promoting the death penalty and being "hawks" when it comes to war mongering.
The United States is the only first world country that still practices the death penalty.
Unitarian Universalists covenant together to affirm and promote the inherent worth and dignity of every person. As Sister Helen Prejan, the author of Dead Man Walking, has said, "Every person is worth more than their worst act."
Posted by David G. Markham at 6:25 PM