Is President Trump coming for UUs who affirm and promote democracy? 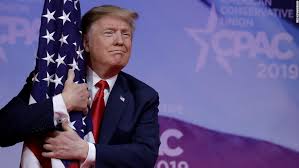 President Donald J. Trump has declared on July 4, 2019 that democracy has died and in its place he is declaring that the country hence forth is a military dictatorship with himself as the supreme leader and commander in chief.

The Republican senators and congress people were on hand for the declaration ceremony and demonstrated their obeisance by kissing the supreme commanders ring as they genuflected before his eminence in front of the Lincoln Memorial.

President Trump stated that he should be worshiped as a deity because he is a "really smart person" and the country under his administration is "doing great!" especially for rich, white people for whom things have never been better.

President Trump pointed out the tanks and the air force jet fly over as proof of his power and might. 75% of Republicans were in awe of the spectacle and called out "Hail to the Chief!!!" When President Trump mentioned the dissenters and critics, he led a chant of "Lock em up! Lock em up!" He invited the crowd to turn on the protesters and beat them up and said if they were arrested he would pay their legal fees and if they were found guilty, they were not to worry because he would pardon them.

The glory of America is unparalleled according to other dictators and foes of democracy around the world.

July 4, 2019 will go down in history as a great turning point in America's history as they see their hopes and dreams come to fruition which they voted for in 2016.

Targets of hate and animosity were not only Mexicans, and Muslims, but also Unitarian Universalists who plot and conspire together to affirm and promote the right of conscience and the use of the democratic process. President Trump declared that he would build a great wall to keep Mexicans, Muslims, and UUs out of the country and the ones who are here he will order his ICE agents to deport immediately. Many of the UUs were panic stricken saying, "I don't know anybody or anything about Transylvania. I hope they are nice and will welcome and help us."

Trump's base cheered and raised their arms in salute to their esteemed leader.
Posted by David G. Markham at 11:10 AM

Email ThisBlogThis!Share to TwitterShare to FacebookShare to Pinterest
Labels: Satire