Are there cosmic moral standards? 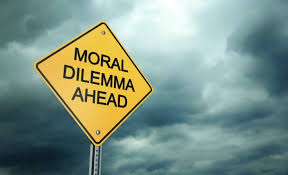 In the course of the Republic Plato will argue that not only do moral truths, when revealed as they really are rather than contextualized into a social construct, have the force to compel a rational person’s actions; but moral truths have the force to compel the rational arrangement for the polis, which will, in turn, help promote the good behavior of its citizens. The good polis is made by the good person, his moral character intact, and the good polis, in turn, helps turn out good persons, their moral characters intact. Plato goes a very far distance in the Republic beyond both the nihilism of Thrasymachus and the social constructivism of Glaucon.Goldstein, Rebecca. Plato at the Googleplex (p. 159). Knopf Doubleday Publishing Group. Kindle Edition.

A universal moral standard was advocated at the Nuremburg trials in opposition to the defense that war criminals were just "following orders."

What is a person to do when they are ordered by an authority to engage in immoral behavior? This question, behaviorally was answered in the famous Stanley Milgram studies where normal human beings did horrible things to inflict pain on others on the authoritative experimenter's orders. Our country has faced similar situations with the "torture" debate a few years ago which gave us the Abu Ghraib crimes.

So where do these more universal, cosmic moral standards come from? Is there a universal right and wrong that transcends culture and social norms and attitudes? Plato argues these higher moral standards do exist? To what extent do you agree?

Do you think that the covenant based on the seven principles of Unitatian Universalism provide a standard of these higher moral values?
Posted by David G. Markham at 10:09 AM