On October 17, 1979, 40 years ago today, Mother Teresa of Calcutta was awarded the Nobel Peace Prize 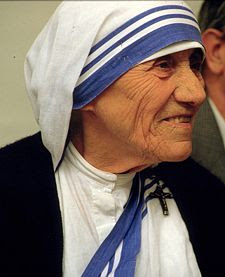 1979 - Mother Teresa of India was awarded the Nobel Peace Prize.

Here's a snippet from Wikipedia:

Mother Teresa, Blessed Teresa of Calcutta, (born August 26, 1910 – September 5, 1997) was an Albanian[2][3] Roman Catholic nun with Indian citizenship[4] who founded the Missionaries of Charity in Kolkata (Calcutta), India in 1950. For over forty five years she ministered to the poor, sick, orphaned, and dying, while guiding the Missionaries of Charity's expansion, first throughout India and then in other countries.

By the 1970s she had become internationally famed as a humanitarian and advocate for the poor and helpless, due in part to a documentary, and book, Something Beautiful for God by Malcolm Muggeridge. She won the Nobel Peace Prize in 1979 and India's highest civilian honor, the Bharat Ratna, in 1980 for her humanitarian work. Mother Teresa's Missionaries of Charity continued to expand, and at the time of her death it was operating 610 missions in 123 countries, including hospices and homes for people with HIV/AIDS, leprosy and tuberculosis, soup kitchens, children's and family counseling programs, orphanages, and schools.