Sunday Sermon - The Truth will set you free. 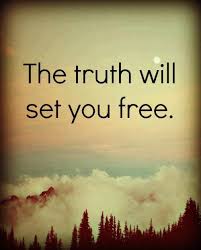 34-35 Jesus prayed, “Father, forgive them; they don’t know what they’re doing.”
Dividing up his clothes, they threw dice for them. The people stood there staring at Jesus, and the ringleaders made faces, taunting, “He saved others. Let’s see him save himself! The Messiah of God—ha! The Chosen—ha!”
36-37 The soldiers also came up and poked fun at him, making a game of it. They toasted him with sour wine: “So you’re King of the Jews! Save yourself!”
38 Printed over him was a sign: this is the king of the jews.
39 One of the criminals hanging alongside cursed him: “Some Messiah you are! Save yourself! Save us!”
40-41 But the other one made him shut up: “Have you no fear of God? You’re getting the same as him. We deserve this, but not him—he did nothing to deserve this.”
42 Then he said, “Jesus, remember me when you enter your kingdom.”
43 He said, “Don’t worry, I will. Today you will join me in paradise.”
Today's gospel reminds me of Donald Trump putting down and smearing the truth tellers at the impeachment hearings.
Trump's Republican defenders join in the sneering with Nunes and Jordon being the worst, but all the Republicans got in their licks.
Adam Schiff and many others, trying to get to the bottom of things for the American people, get attacked, mocked, villified, bullied, and made fun of.
The Repubicans and their supporters have no fear of God, or maybe deep down they fear punishment and vengeance, otherwise why would they behave as they do?
The impeachment hearings have become a major morality play being performed in the front of the American people and the world. And in light of today's gospel WWJD, What would Jesus do?
Jesus would calmly take it all in and not judge and nor condemn. Jesus would forgive and for those who acknowledge their sins, and accept forgiveness, they would join him in paradise. But for those who don't and continue to be bitter, resentful, scared, and attack, they are already in their own hell and it will continue until they chose otherwise.
The story of the crucifixion is not about a man being murdered by the State as much as the Truth being butchered, mocked, belittled, subject to extinguishing by the powers that be. But the Truth cannot die because the Truth is that which is. The Truth can be ignored, defamed, distorted, denied, but it cannot be killed. You might think that we humans would have learned this lesson by now. However we are too self serving, too self deceptive, too arrogant, to acknowledge the Truth even when it is apparent before us.
The lesson of Jesus' crucifixion is not about blood sacrifice as so many Christians insist. As the Universalists know, God does not require nor want sacrifice. What God wants is the acknowledgement of Truth for without it we are consigned to hell and with it we enter into heaven.
The Truth will set us free, the whole Truth, and nothing but the Truth, but there are those who are afraid of the Truth and they create a living hell in our midst. Jesus shows us that the way to deal with deceit and injustice is to forgive for Jesus is quoted as saying, "Father, forgive them, for they know not what they do."
This Thanksgiving as families gather there will be plenty of forgiveness opportunities. There is no need to defend and argue for the Truth for if you have accepted Truth into  your heart, you will already be free.
Posted by David G. Markham at 9:54 AM