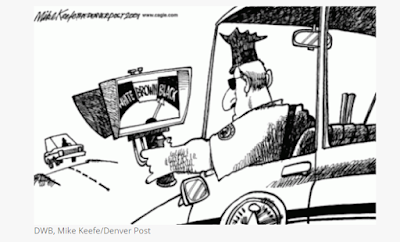 Racial Profiling is a practice of systemic racism promulgated by many politicans like New York City mayor Michael Bloomburg.

Racial profiling has contributed to hyperincareration with young black men to be incarcerated at rates 10 times the rate of whites.

Racial profiling is an act of injustice that uses race as the foundation for shaping perceptions and behaviors associated with defining who is and which groups are designated as “criminal” (Moore, 2015). This definitional system can disadvantage individuals from racial and ethnic minority groups, and has been pervasively applied to stigmatize, stereotype, and target young black men (Weatherspoon, 2004). According to U.S. Department of Justice (DOJ) statistics, in 2014 black male adolescents ages 18 to 19 “were more than 10 times likely to be in state or federal prison than whites” (Carson, 2015, p. 15). For all age groups, black male individuals are arrested and have the highest rate of imprisonment in state and federal facilities. This rate is 3.8 to 10.5 times more than the rate for white men and 1.4 to 3.1 times more than the rate for Hispanic men (Carson, 2015). Many contend that a primary factor explaining this precipitous incarceration rate, known as hyperincarceration, is the practice of racial profiling (Moore, 2015).

Editor's note:
Bolding has been added