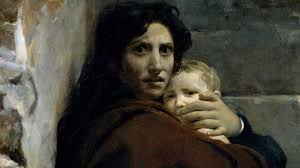 Matthew 2:13-23 The Escape to Egypt
13 When they had gone, an angel of the Lord appeared to Joseph in a dream. “Get up,” he said, “take the child and his mother and escape to Egypt. Stay there until I tell you, for Herod is going to search for the child to kill him.”

So he got up, took the child and his mother during the night and left for Egypt, where he stayed until the death of Herod. And so was fulfilled what the Lord had said through the prophet: “Out of Egypt I called my son.”

When Herod realized that he had been outwitted by the Magi, he was furious, and he gave orders to kill all the boys in Bethlehem and its vicinity who were two years old and under, in accordance with the time he had learned from the Magi. Then what was said through the prophet Jeremiah was fulfilled:

“A voice is heard in Ramah,
weeping and great mourning,
Rachel weeping for her children
and refusing to be comforted,
because they are no more.”

After Herod died, an angel of the Lord appeared in a dream to Joseph in Egypt and said, “Get up, take the child and his mother and go to the land of Israel, for those who were trying to take the child’s life are dead.”

So he got up, took the child and his mother and went to the land of Israel. But when he heard that Archelaus was reigning in Judea in place of his father Herod, he was afraid to go there. Having been warned in a dream, he withdrew to the district of Galilee, and he went and lived in a town called Nazareth. So was fulfilled what was said through the prophets, that he would be called a Nazarene.

This story is sometimes called the slaughter of the innocents. It is a story similar to what is happening under the Trump administration at the Mexico/US border when children are being separated from their parents, put in detention, and several of them have died. This policy is being implemented for political reasons even though it is inhumane and inflicts trauma on children, parents, and probably the people charged with enforcing this policy.

The spirit of Jesus has been recognized again as being born among us at this time of year as we remember His birth. Jesus, being protected and cared for by his step-father, Joseph, was removed from danger and wasn’t among the other male children killed because of the threat that Herod believed Jesus posed to his power and rule. Currently in the U.S.  there are many children who have been removed from their protectors and placed in institutional custody. These innocent children have no idea about U.S. politics and the lengths to which Trump administration officials and their supporters will go to inflict harm on them and their families.

What are we, as a people of faith, to do when such ugliness is perpetrated in our name? In a democracy, we, the people, have the power to remove such people from office and to work to change the minds and hearts for those who support them. We have a moral imperative as Unitarian Univeralists to do our best to make sure that all human beings are treated with dignity and respect and that justice, equity, and compassion are generated in our human relations.

It is sad to realize that things haven’t changed much in 2,000 years in our moral lives as human beings. Atrocities continue to be committed by ruling powers, and in the face of this horror and ugliness has come a Spirit from God encouraging us to find a better way and choose again.