UU AWOL supports Charles Booker for the Senate in Kentucky against Mitch McConnell.

Click below to watch his inspiring launch video to see why, and rush a donation to support the movement he's building to take on McConnell. 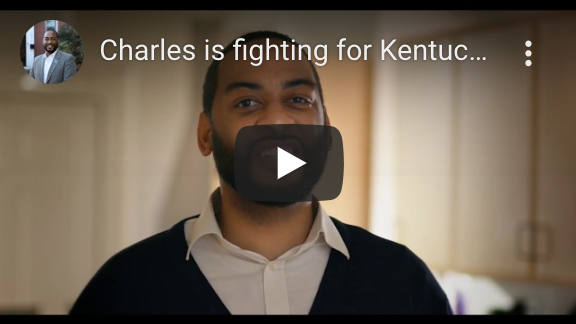 Charles is Kentucky’s youngest black state lawmaker, and he is ready to ignite a movement across our great state. Unlike McConnell and McGrath, and unlike the Republican and Democratic establishment, Charles knows Kentuckians are tired of political games, and ready for change.
But Friend, we need your help. Charles is behind on his $50,000 goal for this month.
Pitch in today to help him reach his goal and stand with Kentuckians in the fight for our futures.
If you've saved your payment information with ActBlue Express, your donation will go through immediately:
Chip in $5
Chip in $10
Chip in $25
Chip in $100
Chip in another amount
Amy McGrath has already raised millions in this race from out of state donors, but her voice isn’t speaking to the millions of working people in our state who deserve a candidate who will fight for a livable future. I’ve lived here my whole life and I know that McConnell won’t go down without a movement to stop him. Will you chip in today to support the only candidate ready to fight unapologetically for my people?
It wasn’t too long ago that Kentucky was a Democratic stronghold — back when the Democratic Party actually stood up for working people. We’re ripe for change again. Just this week, 140,000 Kentuckians had their right to vote restored after our newly elected Democratic Governor took office. Let’s give our people a candidate who will inspire us to the polls next year. A candidate who has stood with teachers at their strikes, who has stood with coal miners for their pensions, who has stood with young people for our futures.
We deserve a candidate who sees Kentucky’s worth — who knows we aren’t a “red state”or a “coal state,” but rather a state the establishment has left behind for too long.
As Charles says, “We’re not a joke, we’re not a tragedy. I know Kentucky is the future, and America should follow our lead.” I know Kentucky can be the future of the Green New Deal, and Charles Booker is ready to fight for that future.
Join me and Sunrise Movement in showing him we’ll have his back in taking on McConnell.
Editor's note:
UU A Way Of Life is supporting Charles Booker and encourage you to do the same. It's time to clean up the immoral Republican Senate and bring people who affirm justice, equaity, and compassion in human relations.
Posted by David G. Markham at 10:54 PM