Religion in the public square - What is a UU to do about the impeachment of Donald J. Trump? 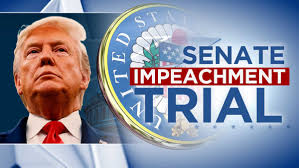 As we watch the impeachment trial in the United States Senate unfold of President Donald John Trump, we can only wonder whether the Republican Senators will act in a fair and just way or whether they will act in an unfair and unjust way to obtain some personal benefit.

Unitarian Universalists covenant together to affirm and promote justice, equity, and compassion in human relations.

Which side is right? Where is the truth? This decision about the truth of the allegations will be determined by the evidence. The evidence clearly demonstrates that the behavior was engaged in and the offenses were committed.

The facts are not in dispute, only the interpretation of what the facts mean, and what is to be done about the harm that is alleged to have occurred and continues to occur.

The problem of justice and fairness is not resolved by siding with one or the other sides of the disgreement and conflict. The problem can only be resolved by questioning the system of adjudication itself.

The problem is not Donald Trump's behavior but the harm that has been done to the democratic institutions and credibility of the U.S. government and the impact on U.S. relationships with its allies and its reputation and credibility around the world.

A constructive adjudication of the charges is not obtained by the congressional conflicted parties but by the offender and the people harmed. What is the harm that Donld Trump's behavior has had on the integrity of the democratic instituions which the American people governed by these institutions have come to depend on? What is the harm that has been done to American's allies. Once this harm is assessed and agreed to, then a plan to repair the harm can be developed.

With Donald Trump's refusal to take responsibility for the harm that has been done, there is little hope that repair of that harm will be attempted by he and his administration. It will be left for others and the best that can be done is that the powers that enabled the perpetration of the injustice to begin with be stripped away from the perpetrator.

In reflecting on this situation of impeachment of Donald Trump which option seems to be the fairest and the most just?

What, if anything, should a good Unitarian Univeralist do in regards to this impeachment of President Trump and the harm that has been done to the American people, its allies, and all the people around the world?
Posted by David G. Markham at 11:43 AM