Use of the death penalty decreasing in the United States 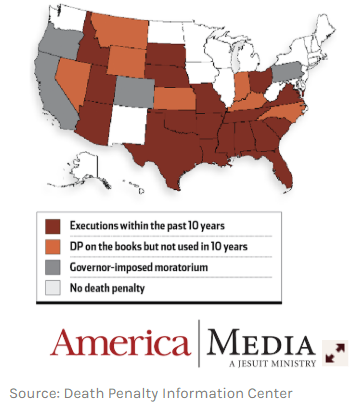 The report by the Death Penalty Information Center, based in Washington, highlighted state actions against the death penalty such as New Hampshire voting to abolish capital punishment, making it the 21st state to do so; California's decision to put all executions on hold; and Indiana's 10-year mark since its last execution.
The report said that all together, 32 states have now either abolished the death penalty or not carried out an execution in more than a decade, and it said this number directly contrasts with the federal government's announcement this year that it would resume executions after a 16-year hiatus.
Unitarian Universalists covenant together to affirm and promote the inherent worth and dignity of every person.
The America Magazine article reads:
This past June (2019), the U.S. bishops voted to revise the death penalty section of the U.S. Catholic Catechism for Adults, reflecting an earlier change made by Pope Francis and the Congregation for the Doctrine of the Faith in 2018. The Catechism of the Catholic Church now states that the "death penalty is inadmissible because it is an attack on the inviolability and dignity of the person."
As a Roman Catholic Unitarian Universalist I believe in the sanctity of human life and the possibility of human redemption. Every person is worth more than their worst act. Join us here at UU A Way Of Life to work for the end of the death penalty.
Posted by David G. Markham at 7:00 AM